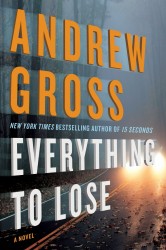 He’s got more than a dozen books, including six #1 New York Times bestsellers, under his belt, and now Andrew Gross is set to release his next emotionally-charged thriller. EVERYTHING TO LOSE incorporates everyman heroes thrust into impossible situations, tense familial drama, and a gripping murder mystery set amidst the devastation of Superstorm Sandy. The author sat down with THE BIG THRILL to take readers behind the curtain of his latest thriller.

Tell us about your new thriller, EVERYTHING TO LOSE.

A desperate, determined mom, with a deadbeat husband and a son with Asperger’s, suddenly loses her job and faces a moral dilemma when she bravely tries to rescue a man in an auto accident and comes upon a trove of cash. The question is how far you would go to save your own child? Maybe even something criminal?  Of course she takes it, out of desperation, and there are always consequences. In seconds, Hilary’s life goes from the moral high ground to total freefall.  Throw in dealing with a behaviorally challenged son with the heartbreak and fear of what’s become known as “C-U kids,” callous and unemotional, thought to be the personality disorder that leads to psychopaths. Combined with a twenty-year-old murder in Staten Island that’s been brought back to life by Superstorm Sandy, including some stories of friends of mine devastated by the storm, and you get the nucleus of character and plot that became the novel.

Much of the book’s setting centers around the aftermath of Hurricane Sandy, a unique and timely backdrop. What were your own experiences with the storm and its aftermath, and how did you integrate those experiences into your new book?

My own experience was, in one way, inconvenience and irritation, having to go eleven days without power (and plumbing), although we did sneak off to our place in Florida. Trust me, everyone in our neighborhood has invested in generators now. But some close friends suffered greatly. Maybe not in loss of life, but one particular friend had her mother’s house on the Jersey shore completely devastated: everything inside—valuables, family photos, mementos, antiques, china, scrap books, every marker of their lives and history, lost forever, washed out to sea. This was a very poignant story to me, and so in the book, I had one crucial piece of evidence that, seen again, exposes the crime at the heart of my story, which was taken by the storm and then, months later, washed back onshore. It’s what sets everything in motion.  I also set much of the book in Midland Beach, on Staten Island, where eleven people lost their lives and to me was like Ground Zero for the storm.

How much of yourself do you put in your characters? With which character in EVERYTHING TO LOSE do you most identify?

How much does every author put of himself into their characters… A lot, of course. What else do we have to draw from? Most heroes, I find, are an idealized version of who the author sees themselves as. In each book of mine, there is always one character who starts out with kind of a minor role but which then grows in drama and heart and ends up becoming a difference maker in the book. You can just feel the energy with which that character is written. In EVERYTHING TO LOSE, it is the woman who I described above, who lost her husband and whose entire life was washed out to sea by the storm. It is she, once that key piece of evidence washes back onshore, who sets the wheels of the plot in motion and becomes in many ways, even as a secondary character, the “heart” of the book.

I do outline fairly heavily. I learned it from doing several books with James Patterson. My outlines can be sixty, seventy chapters, maybe a page per chapter. Each chapter has a purpose—a clue, a reveal, some kind of action, attraction, or just, as I say, “carrying the mail.” So I get that down upfront as best I can. In fact, the first book I sold, THE BLUE ZONE, was actually sold from a detailed outline. I had a few publishers interested and when I went on my publishing road show, a couple said it was the best story outline they’d ever read. I always joked that my one fear in leaving Patterson and going out on my own was that the book wouldn’t live up to its outline. People would say, THE BLUE ZONE, nay, sucked. And a publishing exec would go, “Yeah, but you shoulda read that outline!”  These days, I try to map out half the book on paper before I start. The setup, the characters, how the story starts, who they bad guys are, what’s at stake. I’m a believer in exercising control over the book, not the other way around. Though not so stubbornly that I don’t let the creative winds take me where they blow. I also think that for people just starting out in this trade writing plot-intensive books it’s a damn good exercise to think out where you’re heading in advance. You can always deviate, but better not to be drawn down forty-page blind alleys that don’t lead you to where you want to be.

Other than EVERYTHING TO LOSE, what is your favorite book that you have written (or co-written)?

Favorite book of mine… Hard to say. I find virtues in them all. I guess I’d say THE BLUE ZONE, my first, about a father’s betrayal of his daughter. And EYES WIDE OPEN because it is taken from my own family history beginning with the suicide of my nephew who jumped off the Morro Bay Rock in California. Very personal stuff for me, and leads into an interaction I had as a kid with Charles Manson. I also like THE JESTER, one I did with James Patterson, which was a really beautiful, warm-hearted historical book.

A handful of books stand out that influenced me. DOG SOLDIERS, by Robert Stone, one the first, modern, literary thrillers. It won the NBA in 1974.  ALL THE KING’S MEN, which I urge readers not to read as a “political” novel as they were taught in high school. But as a son’s search for his father, the Telemachus myth. It also has some of the most beautiful prose ever written. RED DRAGON by Thomas Harris, and TELL NO ONE by Harlan Coben, which along with an interesting forgotten thriller called THE WIND CHILL FACTOR by Thomas Gifford, informed me as to what kind of books I wanted to write.

We’ve been a lot of places but Italy always works for me, especially Tuscany. It combines three themes in our own life: European history, fresh food and great wine. There is no sight that sends a feeling of pleasure and spirituality through me like a beautifully terraced, mountainside vineyard.

The most rewarding thing about writing… The check. Alright, that’s pretty cynical. How about the commute?

I’m a strong believer in taking risks in structure in a book and sometimes, because I had a background with Patterson and generally write approachable, fast paced books, I think some of the novelties of structure I’ve used—shifting timelines; divergent plot lines that only come together until halfway through the book; narrators who sometimes keep secrets from the reader—sometimes may go underappreciated. I’m actually much better read classically than in my own genre and I’m attracted not only to building a story in a linear way, but from multiple point-of-views and using that structure to continually surprise your reader, because that’s what a mystery/thriller is about to some degree—withholding from and then surprising your reader.

Hmmm… I hate the advice thing, because everyone’s path is different. The first is to have patience. Writing is a process of continuous improvement, and many times, in the haste to get your work read or see it published, new writers rush things and believe a piece is done well before it is. All good things come from second, third, and fourth, and sometimes twenty drafts, when it comes to a pivotal scene. My second thought is, know what you’re getting into in this game today. Bookstore doors are way down, as are publisher advances. Publishers have a hard time building authors the way they used to. Much of the marketing falls back on you, the writer. Carving out a career is damn hard. It’s not to say, no, don’t go after it. In most cases writing isn’t a choice! But it is to say, go after it if you want it with your eyes open because the romantic notions of having a book out are quickly dispelled by reality.

Ty Hauck is back. My readers have overwhelmingly asked for him, so we’ll see him again after a four-book absence. He’s been hanging out in the Caribbean, bone fishing, trying to decide what’s next in his life after solving the murders of his friend April, who may or may not have had his son. But when a friend calls saying his daughter’s in some trouble in Colorado, he’s on the next plane. Think fracking and water rights. And as his secretary says, worried about his deepening interest out there: “You know what happens when you get involved, Ty.”

Thanks to the author for shedding some light on the fascinating personal touches in his latest project. Don’t miss Andrew Gross’s EVERYTHING TO LOSE when it hits shelves April 22. 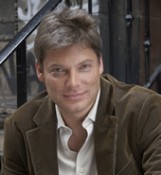 Andrew Gross is the NYT bestselling author of eight thrillers including The Blue Zone, 15 Seconds and No Way Back, as well as five NYT#1 bestsellers co-written with James Patterson. His 2008 novel, The Dark Tide, was nominated by ITW for Thriller of the Year. His books have been translated into over twenty five languages.