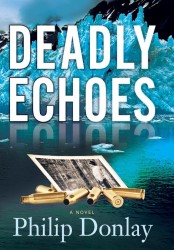 Write what you know. We’ve all heard it a gajillion times in school. Later, it was the advice from some well-meaning relatives when we announced that words were going to be a mainstay of our lives/livelihoods. But as his fourth book debuts, Philip Donlay is a great example of a new approach to writing, Write what you’re passionate about.

A native of Wichita, Kansas, Donlay discovered the Pacific Northwest, where he now lives, and a passion for the environment later in life. So, instead of drawing on the flood of stories that would naturally flow from a decades-long career as a global corporate pilot, Donlay decided that Donovan Nash, his series protagonist, would follow Donlay’s passion for the environment.

Donlay explained his series started like many, “I developed some interesting characters, then I needed to find a way to get them into serious trouble.” But in choosing to write thrillers with an environmental slant, Donlay noted, “I know that novels are not a place to preach, but they’re a great springboard for discussion.”

Donlay offered the practice of shark finning as an example of how novels can be eye opening without being heavy-handed. “It’s a tragic and indefensible form of poaching,” Donlay said. “When I started asking people what they knew, I was surprised at how little it was.” So, Donlay knew he had an opportunity to educate and entertain. “People told me they never looked at shark fin soup the same way again.”

In DEADLY ECHOES, the fourth installment of the Donovan Nash series, readers will find Nash as a man under siege. Eco-Watch, the premier scientific research organization he founded, is being blamed for a series of violent eco-atrocities, which ignite protests around the world. Behind the attacks is Garrick Pearce, a man from Donovan’s past, a killer who knows the truth about Donovan, and is bent on a ruthless vendetta. With his world in tatters and everything he built seemingly destroyed, Donovan is forced to make one last desperate gamble to forever stop Garrick and the secrets he holds—a roll of the dice that may very well cost Nash his life.

When asked to describe his protagonist, Donovan Nash, Donlay said, “He’s an intelligent, capable, mess who’s more comfortable saving the world than his own marriage at times.” An ongoing theme through the Donovan Nash series is that life-altering decisions he made in his twenties, that seemed right at the time, have returned to haunt him. Don’t you wish that only happened in fiction?

According to Donlay, Nash has bigger problems to solve than his past or saving the world. Female fans of the series are identifying as much or more with Nash’s wife, Lauren, as they are Nash, “Many are convinced it’s the Lauren McKenna series.”

After Donovan Nash—and Lauren McKenna—fans have devoured DEADLY ECHOES, they’ll be glad to know there is a fifth installment of the series waiting in the wings. While Donlay was tight-lipped, he teased with, “Guatemala, volcanoes, kidnapping, and chaos.”

Good luck guessing the plot lines of that one, or any of Donlay’s novels. He prides himself on keeping his readers guessing to the very end, “It’s maddening to have one-hundred pages left and you already know who did it. Even with twenty pages left, I still want my readers left guessing who survives and who doesn’t.”

If that isn’t enough to keep fans on edge, Donlay’s real-life aviation experiences find their ways into each of his novels, “I want to put them in the cockpit of the crashing plane, and have their hands sweat along with the pilot. I often dare my readers to read one of my books while they’re flying on an airliner.”

Five books and counting. Not a bad run for a man who admittedly has a love for writing, and a dysfunctional relationship with his keyboard, “I hated typing in school and still haven’t learned how. I type everything with two fingers. I may use my thumbs when I’m on a roll.”

And on a roll he is. Learn more about author Philip Donlay and the Donovan Nash series at www.philipdonlay.com.

Philip Donlay learned to fly at age seventeen and was first published at eighteen. In the aviation world, success came quickly and he’s been flying jets since he was twenty years old. Whether flying a Saudi sheik, nighttime freight, or executives of a Fortune 500 company, Donlay has logged over six million miles while spanning the globe to 40 countries on five continents. Donlay is the author of four novels, Category Five, Code Black, Zero Separation, and Deadly Echoes. He divides his time between Minneapolis and the Pacific Northwest.