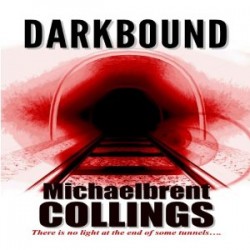 There is no light at the end of some tunnels….

For six of those fares, the trip is going to be one they will never forget.

Six strangers will board a subway. But this subway is unlike the others.

DARKBOUND is available from Audible.

“DARKBOUND is a bit of a departure from Collings’ previous works, but by no means in a bad way. It’s grim, gooshy, and gloriously gruesome … while also poetic in an almost Dante-esque way. Really good, highly recommended, make sure you have time to read a lot at one sitting since you may have a hard time putting it down.” – The Horror Fiction Review

“In Darkbound you will find the intensity of Misery and a journey reminiscent of the train ride in The Talisman. Collings emulates Stephen King as a storyteller as well, and is right there with the master of horror in entertainment, passion and drive. A proficient and pedagogical author, Collings’ works should be studied to see what makes his writing resonate with such vividness of detail….You will not be disappointed in this dark tale. And you might even find a surprise or two. But be warned, sometimes the biggest lies are the ones we tell ourselves.” – Hellnotes

“Darkbound travels along at a screaming pace with action the whole way through, and twists to keep you guessing throughout….  With an ending that I didn’t see coming from a mile away, and easily one of the best I’ve had the enjoyment of reading in a long time….” – Horror Drive-In

“An unforgettable read, and one that you will compare all future novels to.” – Horror Novel Reviews