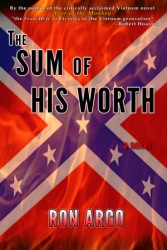 The Sum of His Worth is a Southern gothic thriller set in the violent 1950s in a corrupted Alabama town ruled by a virulent Ku Klux Klan. The story is told by a free-spirited white boy whose life is shattered after witnessing a lynching. Hungry to leave behind his deprived and now desperate life, his survival will depend on gut courage, a devoted Negro friend, and a progressive doctor who has taken up the fight to free the town’s black community. The Sum of His Worth is a compassionate and terrifying story that sees both “Doctor Joe” and the boy suffer betrayals, beatings, arrest and exile in a story that can only end in tragedy.

“The Sum of His Worth is a work of serious literary fiction, a coming-of-age story set in a time of national upheaval … rich in ambiance, descriptive detail, and incident … My interest never flagged in this convincing, meaningful, and deeply immersive tale.” — Ron Terpening, author of international thrillers Nine Days in October and Tropic of Fear.

THE SUM OF HIS WORTH is available from Amazon, Barnes & Noble and the authors website.

“Ron Argo’s depiction of Alabama in the late 50s and early 60s is as unrelenting as a shutter click, the image clear and unforgiving. From grits and okra to the horror show of white robes and burning crosses, the images are spot on perfect. So are the characters … No reader will fail to come out of it unchanged.” — Sharon Skains, author of Waltzing with the Devil

” … Jim Crow was interwoven with growing up in small-town Southern life. Argo has captured this nuance … Here, courage is not a single act, but an ongoing commitment that can separate one from everything that is deeply loved.”
–Colonel Michael Moran, USMC (Ret)

Ron Argo is an award-winning journalist and novelist and a decorated Vietnam veteran. Critics hailed his first novel, Year of the Monkey (Simon & Schuster), as one of the seminal novels of the Vietnam generation, ranking him alongside America’s best war novelists– Mailer, Stephen Crane, Jones and Dos Passos. The Courage to Kill is the first thriller in the Ray Myers series. Baby Love, the forthcoming second novel in the series, pits Myers against ruthless criminals involved in the dark world of international baby smuggling. His latest novel, The Sum of His Worth, a gripping historical novel set during the Civil Rights Movement of the 1960s, is the moving story of a teenage boy and a doctor’s struggle against a virulent KKK to save an African American community in Alabama. Argo lives with his wife in San Diego, California.