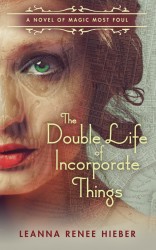 “Just when we think our nightmares are over, the Society has invented a new horror. Around every corner a shadow, behind every whisper a demon. If we don’t end what the devils began, we will die haunted…”

The finale in Hieber’s acclaimed Magic Most Foul trilogy: The trauma and the terror of the Master’s Society has only escalated for the dashing Lord Denbury and brave, feisty Miss Natalie Stewart, and a new terror has been unleashed in Manhattan. Together with their stalwart friends and unlikely heroes, they take the fight directly to the Denbury estate, where new evils have awakened. But are they prepared for all the sacrifices that shall be asked of them? With their very lives and the sanctity of their mortal souls at stake, Natalie and Jonathon are past the point of no return…

“You’ll love it if you love murder mysteries with a supernatural twist… the story is so different from other fantasy novels that have been coming out recently. This chilling tale will draw you in and keep you guessing until the very last page! – Seventeen Magazine on DARKER STILL, a Daphne du Maurier finalist for excellence in Mystery and Suspense (Historical Category)

THE DOUBLE LIFE OF INCORPORATE THINGS is available from Amazon and Barnes & Noble.

Praise for the Magic Most Foul saga:

“The second Magic Most Foul book is a great and chilling read. You’ll be left hanging till the end. A very romantic book that’s like a mini roller-coaster ride with well-formed characters. Hieber is an author to look out for!” – RT Bookreviews on The Twisted Tragedy of Miss Natalie Stewart

“This second Magic Most Foul book picks up where the first left off, offering enough background details for even readers new to the series to be swept up in the excitement.” VOYA on The Twisted Tragedy of Miss Natalie Stewart

“The writing and story-telling is just as beautiful as it has been in previous novels.” – Bows & Bullets Reviews on The Double Life of Incorporate Things

Author, actress and playwright Leanna Renee Hieber graduated with a BFA in Theatre and a focus in the Victorian Era. She began her theatrical career with the Cincinnati Shakespeare Company and began adapting works of 19th Century literature for the stage.

Her debut novel, The Strangely Beautiful Tale of Miss Percy Parker (Strangely Beautiful series) landed on Barnes & Noble’s bestseller lists, won two 2010 Prism Awards (Best Fantasy, Best First Book) and is currently being developed as a musical. This currently out-of-print series will reissue in 2014 from Tor/Forge. DARKER STILL: A Novel of Magic Most Foul, hit the Kid’s/YA INDIE NEXT LIST as a recommended title by the American Booksellers Association. Leanna’s short fiction has been featured in anthologies such as Willful Impropriety: Tales of Society and Scandal, “Too Fond”; a short story on Tor.com, “Charged” in Queen Victoria’s Book of Spells: Tales of Gaslamp Fantasy (Tor) and the upcoming Mammoth Book of Gaslight Romance. Her new Gaslamp Fantasy series with Tor/Forge, THE ETERNA FILES, launches 2014. Her books have been translated into many languages and have been selected for multiple book club editions. Leanna is a member of the Science Fiction and Fantasy Writers of America and International Thriller Writers. She is proud to be a co-founder of the original Lady Jane’s Salon Reading Series in New York. Leanna was named the 2010 RWA NYC Chapter Author of The Year. A member of Actors Equity Association and SAG-AFTRA, Leanna works often in film and television on shows like Boardwalk Empire. When not writing or on set, she’s busy telling ghost stories, frequenting Goth clubs, corset shopping, channeling Narcissa Malfoy, wandering graveyards and generally adventuring about her adopted hometown of New York City, where she resides with her husband and their beloved rescued lab rabbit.

The Sum of His Worth by Ron Argo

The World Beneath by Rebecca Cantrell