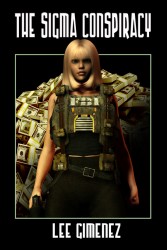 Ex-Special Forces operative turned private-eye J.T. Ryan is hired by the FBI to help them thwart a menacing threat to the global economy. Counterfeit currency is turning up in large quantities and is indistinguishable from the real thing. The federal agency has only one lead. Before being killed in Rome, an FBI agent found a name, Sigma. With not much else to go on, Ryan goes to Italy. There he begins to uncover the operation of a secret cabal of industrialists. The shadowy group, known as the Alliance, is bent on dominating the world’s currency markets. It appears they are using new, high-tech forging equipment called Sigma. Their plan is to destabilize the U.S. Dollar and the Euro and replace it with their own currency.

Barely surviving several attempts on his life as he sifts through a harrowing maze of deception and death, Ryan follows the leads from Rome to Mexico City and then to Moscow. As he uncovers the final layer of the conspiracy, he realizes the shocking truth: the real power behind the Alliance is in Washington D.C.

Can he blow the lid off the conspiracy before the global economy collapses?

THE SIGMA CONSPIRACY is available from Amazon and Barnes & Noble.

“The Sigma Conspiracy is a top-notch mystery thriller.”

“an incredible, fast-paced tale of intrigue and suspense.”

“Mr. Gimenez has proven once again that he’s one of the very best in the business of writing modern thrillers.”

“This is a novel that grabs you from the opening page and never lets go.”

Lee Gimenez is the author of nine novels and over fifty short stories. Several of his books became bestsellers, including BLACKSNOW ZERO, THE WASHINGTON ULTIMATUM, and THE NANOTECH MURDERS. His latest mystery thriller, THE SIGMA CONSPIRACY, was published by Double Dragon Press in January 2014.

For more information about him, please visit his website at: www.LeeGimenez.com. You can also join him on Twitter, Facebook, Google Plus, LinkedIn and Goodreads. Lee lives in the Atlanta, Georgia area.