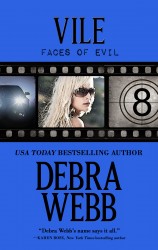 Deputy Chief Jess Harris knows her time is running out. Somehow she must protect the people she loves and any more innocent victims from the serial killer obsessed with her.

Is sacrificing herself the only way to stop this evil?

Don’t miss the latest installment of this thrilling series!

FACES OF EVIL BOOK 8 is available from Amazon.

DEBRA WEBB, born in Alabama, wrote her first story at age nine and her first romance at thirteen. It wasn’t until she spent three years working for the military behind the Iron Curtain—and a five-year stint with NASA—that she realized her true calling. A collision course between suspense and romance was set. Since then she has penned more than 100 novels including her internationally bestselling Colby Agency and Faces of Evil series.

The Sigma Conspiracy by Lee Gimenez