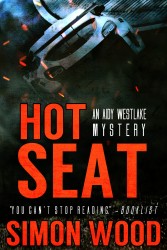 Things are looking good for Aidy Westlake. He’s Pit Lane magazine’s Young Driver of the Year, which has earned him a drive in the European Saloon Car Championship. But his good fortune ends at a race car show when he discovers Jason Gates, a mechanic from a rival team, with his throat cut. The murder sets off a disturbing chain reaction – someone is breaking the rules in the ranks of saloon car racing, on and off the track.

“Watch Aidy get into one jam after the next.”
— Kirkus

“Racing scenes enliven the action as Aidy tries to extricate himself from trouble by trapping a killer.”
— Publishers Weekly

Simon Wood is a California transplant from England. He’s a former competitive racecar driver, a licensed pilot, an endurance cyclist and an occasional PI. He shares his world with his American wife, Julie. Their lives are dominated by a longhaired dachshund and four cats. He’s the Anthony Award winning author of Working Stiffs, Accidents Waiting to Happen, Paying the Piper, Terminated, Asking For Trouble, We All Fall Down and the Aidy Westlake series. His latest thriller is NO SHOW, the first in the Terry Sheffield mysteries. He also write horror under the pen name of Simon Janus. Curious people can learn more athttp://www.simonwood.net.