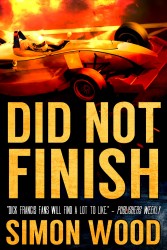 The first book in the Aidy Westlake mystery series set in the high-octane world of motor racing – When Derek Deacon threatens to kill Alex Fanning, his championship rival, rookie driver Aidy Westlake doesn’t put much stock in it – it’s typical of the intense competitiveness and aggression in their world. But when Fanning dies after making contact with Deacon’s car during a race, a conspiracy ensues: the TV coverage is edited and the police wind up the investigation without interviewing witnesses. Compelled to prove Deacon is the murderer, Aidy pushes for the truth and is drawn into a world of fraud, organized crime and murder.

“Wood kicks off this new series with a streamlined narrative, a spot of believable romance and some deftly introduced tidbits about the British racing circuit. Think of Dick Francis’ early thrillers, especially Nerve, but with a lot more horsepower.”
— Kirkus

DI NOT FINISH is available from Amazon, Amazon UK and Barnes & Noble.

“Wood convincingly portrays Aidy’s awkward efforts at amateur detection as well as his gentle, tentative romance with the dead man’s fiancée, while entertainingly imparting information about the perils and exhilaration of single-seat Formula Ford racing. Dick Francis fans will find a lot to like.”
— Publishers Weekly

“It is filled with suspense and startling revelations, and is recommended.”
— CrimeSpree Magazine

Simon Wood is a California transplant from England. He’s a former competitive racecar driver, a licensed pilot, an endurance cyclist and an occasional PI. He shares his world with his American wife, Julie. Their lives are dominated by a longhaired dachshund and four cats. He’s the Anthony Award winning author of Working Stiffs, Accidents Waiting to Happen, Paying the Piper, Terminated, Asking For Trouble, We All Fall Down and the Aidy Westlake series. His latest thriller is NO SHOW, the first in the Terry Sheffield mysteries. He also write horror under the pen name of Simon Janus. Curious people can learn more athttp://www.simonwood.net.

February 17 - 23: "Is deception an essential feature of thrillers?"