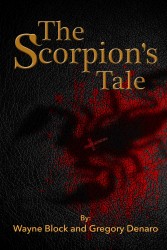 Thanks to the killer’s handiwork, Tony’s partners were also dead in Manhattan. The killer needed to finish his business in Westhampton tonight, so he could make his flight to Italy before any of the bodies were discovered. From his neck down he dressed like a surgeon with cotton coverings over his clothes and shoes that were specially made to fit although they were two sizes too large. He also wore latex gloves and a ski-mask to ensure that his entire body was protected against leaving even a cell of his DNA behind.

Looking into the eyes of his victims in their final moment of life did not faze him. In fact, it gave him pleasure. The sound of Tony’s head smashing into the door disturbed him only because the success or failure of an assignment might hinge upon an unknown factor – variables that were his job to minimize. He never left anything to chance, carefully tending to the crime scene, making sure there was no evidence to assist law enforcement. Satisfied all was in order, he silently exited the master bedroom, gun in hand.

Amanda tried the light switch in the kitchen, but it didn’t work. She opened the refrigerator door, found a pitcher of water, and poured a tall glass for her and Catarina to share. She replaced the pitcher, closed the refrigerator, took a step into the hallway and immediately noticed a large shadow of a person, obviously much taller than Tony. She shrieked in surprise and dropped the glass, which shattered. The killer reacted without conscious thought. He instinctively raised his gun and fired. Amanda made a loud moaning sound as she crumpled to the floor. Suddenly there was another scream behind him. He turned and aimed at the sound, not realizing that his gun was pointed at a forty-five degree angle toward the floor. He fired again and there was silence. It took only a split second for him to realize that the voice had screamed “Mommy.”

Bred to kill, he is the perfect weapon. A soulless assassin until a fatal mistake. Now he is hunted by a father for killing his wife and children. A continent away, another family slaughtered. A beautiful daughter teams with a Mafia enforcer on her own quest to find him. A story of revenge and redemption. The tale of the Scorpion.

THE SCORPION’S TALE is available from the Authors website, Amazon and Smashwords.

“I couldn’t put it down! I haven’t had such an experience in years!! Definitely breaks the mold of the “cookie-cutter” thrillers, that are so prevalent in the market today. The ending was truly unexpected! I hope that there’s a sequel!!”

“A rousing good story with well developed characters….seems like I almost knew them. Thought the story line was enjoyable and made for a nice quick read.”

“Original concept. The story and characters had me on an emotional roller coaster. Who I admired I later hated. And The Scorpion…. The ending was spectacular with a twist that was tight and believable. I cant wait for the sequel.”

“I read A LOT of thrillers and can usually guess the ending before I arrive, but holy cow, I NEVER saw this one coming!! This is a very well written story that sucks you in and holds you tight. I found myself rooting for the bad guy…I mean who does that? But he was so well written and had his own in depth back story that I empathized with him even as I disagreed with what he was doing.I am already awaiting the sequel!!!!”

“I’m not a mystery/suspense reader but in this case I’m glad I changed genres. Extremely well-written with very interesting characters, each with their own unique backgrounds and perspectives. I found myself rooting both for the hero and the “villain,” and in the end… well, if I told you I’d have to send the Scorpion to kill you. You’ll just have to see for yourself. I highly recommend to anyone who likes thrillers but also to people like myself who dabble in new genres from time to time. Saying it is action-packed would be an understatement.”

“I don’t often read thrillers myself, so I was surprised by how much I enjoyed this novel. It was set in numerous locations, which made it a lot of fun to read and made the pace of the story energetic. I also liked that the story seemed naturally written; one thing that turns me off about thrillers is that they are often so contrived with some shocking twist thrown in at the end. This novel wasn’t like that at all – just a lot of fun and not overdone. I would have given it 5 stars if I could have bought it in hardback.”

Wayne and his wife, Annemarie, live in Miami and have two daughters, Alexandra (25) and Ilyssa (19). Wayne grew up in New York, and has also lived in St. Louis, London and Memphis. A graduate of Washington University in St. Louis and the University of Miami School Of Law, Wayne has been practicing law for over thirty years. He has worked as a prosecutor for Janet Reno, in-house counsel for the University of Miami, senior associate at the global law firm of Baker & Mckenzie, chief litigation counsel for International Paper Company, and general counsel for a prominent real estate company in Miami.

The Scorpion’s Tale was inspired in part by Wayne’s love of travel and the time he has spent in Las Vegas, St. Thomas, Ecuador, Italy, Brazil, Roatan, Chicago and many other places. The characters in the story were inspired by memorable people he has met in both his personal and professional life. Wayne is an avid scuba diver, kayaker, fisherman, golfer, boater and musician.