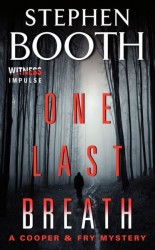 A twisted thrill ride perfect for fans of Ian Rankin and Peter James.

Around the ancient cave system in Derbyshire are thronging tourists, a medieval castle, and the thriving town of Castleton. With its underground tunnels and caverns, it’s the perfect place for a man to hide – or vanish. Detectives Ben Cooper and Diane Fry are looking for such a man, one who is on a murderous rampage.

An convicted killer is on the loose, and, after thirteen years in prison, he may be seeking revenge on the son of the cop who put him away in the first place… Cooper’s father.

ONE LAST BREATH is available from Amazon, Barnes & Noble and iTunes.

“A master of psychological suspense, Booth hauntingly evokes the ambiguities of place and the enduring complexity of human relationships” – Publishers’ Weekly

A former newspaper journalist, Stephen Booth is the creator of two young British police detectives, Ben Cooper and Diane Fry, who appear in 13 novels, all set in England’s beautiful and atmospheric Peak District. The Cooper and Fry series has won awards on both sides of the Atlantic, including two Barry Awards for Best British Crime Novel. Ben Cooper was nominated for a Sherlock Award for the Best Detective created by a British author, and in 2003 the Crime Writers’ Association presented Stephen with the Dagger in the Library award for the “author whose books have given readers most pleasure”.