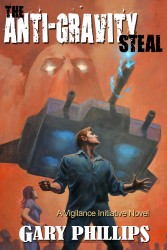 Eighty-one years ago this past February at the height of the Great Depression, premiered the first issue of Doc Savage magazine. Inspired by those larger-than-life characters and stories, veteran mystery novelist Gary Phillips introduces Ned “Noc” Brenner in The Anti-Gravity Steal novella.

Noc, is a drifter gifted at whatever he attempts; from MMA fighter, motocross rider to blitz chess master. But after wining in an all-night poker game, he saves one of the players from a kidnapping. This sets in motion several pulse pounding events and he winds up teamed with a man who can be anyone else, an enigmatic woman with black ops trained esper powers, and a professor haunted by tragedy loosing himself in creating gadgets.

Noc, who has a few dark secrets of his own, and his new allies are out to prevent super villain Prospero from unleashing an anti-gravity device, a machine that would imperil millions.

From the Crime Fiction Lover –
“Independent publisher Stark Raving Group is set to launch a new app giving readers access to previously unpublished novellas by a range of authors writing in crime fiction, sci-fi, horror and more. Bookxy will be available for Android and iOS smartphones and tablets in December. Once you’ve got it installed you can purchase books for $2.99.”

THE ANTI-GRAVITY STEAL is available from Bookxy.

Gary Phillips’ other work includes the novel Warlord of Willow Ridge, and short stories in the upcoming Asian Pulp and Black Pulp II.

The Loon by Michaelbrent Collings

One Last Breath by Stephen Booth