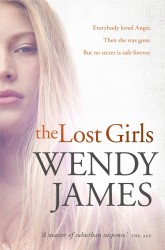 Angie’s a looker. Or she’s going to be. She’s only fourteen, but already, heads turn wherever she goes. Male heads, mainly, and that isn’t a good thing. When Angie goes missing and is eventually found murdered, police have no leads and the case goes cold. Thirty years later, a journalist arrives with questions about the tragic event. The shocking truth of Angie’s last days will force her cousin Jane to question everything she once believed. Because nothing—not the past or even the present—is as she once imagined. A thought-provoking new novel by Australian author Wendy James, called “haunting” and “powerful” by early reviewers, is grabbing attention for the strong blend of suspense and drama. The winner of the Ned Kelly award for Best First Crime Novel knows her way around thrillers and this one will definitely gain her new international fans. Contributing editor Cathy Clamp sat down with the author to talk about THE LOST GIRLS.

You’ve mentioned that this book is loosely based on a murder in the 1940s. What grabbed your attention about the original crime that sparked the idea for this book?

The story was an interview—fifty or so years after the event—with a woman who had been a school mate of a young girl who went missing girl after going to the local milk bar one afternoon to get a loaf of bread for her mother. The girl’s body was found in a local cemetery the next day. She’d been murdered, strangled. The interviewed woman had a theory about what had happened all those years ago—a theory that was a long, long way from the direction the original police investigation had taken. It got me thinking about the idea of children knowing far more about such events than they let on, as well as the long term emotional impact of such knowledge, especially when added to the grief and trauma of losing a beloved family member in such circumstances.

Your publisher is using the term “domestic suspense” to describe the book. Tell us a little more about the combination of elements that define that term.

Novels of domestic suspense contain all the best aspects of suspense novels—a mystery with endless twists and turns, pacy writing, and an edge-of-your-seat denouement—but within a domestic setting. The facade of a serene domestic life is peeled back to reveal something far darker—rather than the crime being committed outside the safety of the home, by malevolent strangers, the crime could be—as many true crimes are—an “inside” job…

Is this a stand-alone novel or will readers recognize characters from any of your other books?

So far this is a stand-alone novel, but I’m hoping that the journalist who pursues the story, Erin Fury, could become a permanent fixture.

Most writers put a little bit about things familiar to them in a book. What about your own life did you put into the book?

The area that the story is set in—the northern beach suburbs of Sydney and more particularly the oddly named suburb of Curl Curl—is an area where I spent quite a bit of my childhood. Some of the novel is set in the late 1970s, and I’ve tried to evoke this particular place during this era—so there are crocheted bikinis and bamboo thongs and pinball parlours, along with the singular experience of being an adolescent girl during that period.

What’s the most interesting thing you discovered or that happened to you while researching the book, whether or not it made it onto the pages?

I actually met an elderly woman whose father had been the investigating detective on that original murder back in the forties. She could remember him talking about the case—it was a particularly shocking and baffling crime, and had remained in his memory.

Will you be doing any signing tours or events for the release?

Details of tours and events will be put up on my website and Facebook page, and readers can get a signed copy by emailing me direct at wendyjam@gmail.com.

Do you attend any conferences or conventions outside of Australia where international readers can meet you?

Where can readers find you online to learn more or read a sample?

What can readers expect next from you?

Readers can expect more thrilling investigations into the dark side of suburban lives.

For those with an interest in history and crime—my first two novels (including the Ned Kelly Award-winning novel OUT OF THE SILENCE) are now available internationally as digital books on Amazon.

Thanks so much for dropping by THE BIG THRILL. Good luck with the novel. It sounds fascinating! 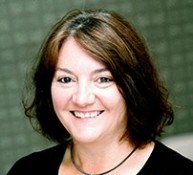 Wendy James is the author of six books, including The Mistake (2012) and Out of the Silence, which won the 2006 Ned Kelly Award for Best First Crime fiction and was shortlisted for the Nita May Dobbie Award for women’s writing. She currently lives in Newcastle, New South Wales with her husband and two of their four children.