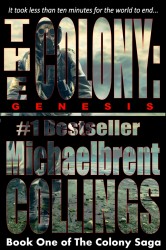 FORGET EVERYTHING YOU THINK YOU KNOW ABOUT ZOMBIES.

In under 10 minutes, 99.9% of the world’s population will be dead… or changed.  Conversion is instant.  Headshots just make them angry.  And they’re getting smarter.

Ken Strickland has made it through the first moments.   But his family is still out there.

Can he survive?   Can he find them?  Or will he become one more of the creatures that now rule our world?

“One hell of a roller coaster ride!” – Joe McKinney, Bram Stoker Award-winning author of Flesh Eaters and The Savage Dead

“Once again Michaelbrent delivers a smashing novel with The Colony: Genesis, the first book in a proposed new series.  From start to finish, this novel is a fresh look into the world of apocalyptic proportions, brought on by anyone’s guess…. the action and intrigue throughout is almost non-stop.  I read it in less than two days, and I’m glad I did.”  – Horror Drive-In

THE COLONY is available from Amazon and Audible.

“I barely had time to buckle my mental seatbelt before the pedal hit the metal….” – The Horror Fiction Review

“What a refreshing read.  This is the first of a series and if this is any indication of what’s to come, count me in! ….  If I could, I would gladly give this novel a 10 star rating.” – Horror Novel Reviews

“If you like zombie apocalypse books, this book is the one for you.  Michaelbrent Collings again hits it out of the park.” – Monster Librarian