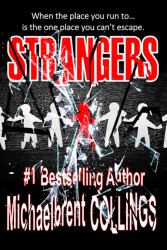 You wake up in the morning to discover that you have been sealed into your home. The doors are locked, the windows are barred. There’s no way out. A madman is playing a deadly game with you and your family. A game with no rules, only consequences. So what do you do? Do you run? Do you hide? Or do you die?

“Collings draws us into a world of madness and insanity, of unimaginable malice, of brutality that stains every room, every nook and cranny of the house with blood….  There are twists aplenty, characters whose depths of darkness and isolation astound even themselves, moments of spine-tingling, edge-of-the-chair suspense, sudden appearances and equally sudden disappearances–all designed to make readers wonder who, precisely, are the Strangers.  Highly recommended.” – Hellnotes

“Every page, every chapter, every turn, there is an onslaught of action and it does not let up….  Collings is so proficient at what he does, he crooks his finger to get you inside his world and before you know it, you are along for the ride. You don’t even see it coming; he is that good.” – Only Five Star Book Reviews

STRANGERS is available from Amazon and Audible.

“Move over Stephen King…Clive Barker…. Michaelbrent Collings is taking over as the new king of the horror book genre.” – Media Mikes

“STRANGERS is another white-knuckled journey that demands to be read in one sitting. It’s all too plausible, and almost guaranteed to make you take some uneasy, paranoid looks at your live and the lives of those around you. Top-notch creepy, a win all the way!” – The Horror Fiction Review

“Michaelbrent spins a tale that keeps you enthralled from page to page, making you want to know what this family did to deserve such a horrific turn of a events. Overall I give this novel an A.” – The Horror Drive-In

“Strangers is Collings’ most penetrating book…. a riveting and exciting book that gets better and better as you turn the pages. This isn’t just a horror novel or a good read, this is a serious book that has something important to say. Be sure to get his one.” – Horror-Web.com

One London Night by Denise A. Agnew

The Colony: Genesis by Michaelbrent Collings