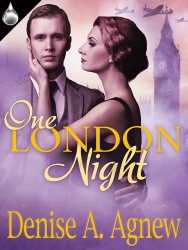 A time when uncertainty festers within even the strongest of men.
A time when fear rules everyone’s lives.
A time when love dares to defy the devastation of war.

After years away, American War Correspondent Sylvie Hunnicut returns to England determined to put aside tumultuous memories and muster the courage to cover the war in Great Britain. Guilt she harbors over a horrible accident that permanently injured childhood friend Alec Kent threatens to destroy their relationship. Secret longings for him remain in her heart, even if he wants nothing to do with her.

Alec Kent’s disability works against him in serving his country, until he signs on with the Auxiliary Fire Service. Sylvie’s return brings to the forefront Alec’s hidden love for her, and a determination to prove himself to his disapproving father.

But war promises to destroy the possibility of love and bring a great city to its knees.

ONE LONDON NIGHT is available from Amazon and Liquid Silver Books.