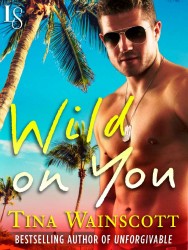 Introducing the Justiss Alliance, an elite team of SEALs out to do right. One untamable hero meets a woman who handles the wildest sort of animals—until she herself becomes the hunted.

When Rick Yarbrough, a.k.a. Risk, a retired SEAL with a taste for danger, joins the Justiss Alliance, his first assignment seems like a baby-sitting gig: He must guard an out-of-control general’s daughter. Then he meets his charge.

Addie Wunder is no baby. She’s a dedicated animal rights activist who isn’t above breaking the law if innocent creatures are threatened. But her work has made her a lot of powerful enemies. If she doesn’t stop, she may just turn herself into an endangered species.

Risk’s mission is to keep Addie out of trouble. But as they grow closer, Addie becomes so much more than a job. And the more he has to lose, the more Risk is willing to put his own life on the line—for her cause, her safety, and her sweet-hot embrace.

WILD ON YOU is available from Amazon and Barnes & Noble.

Tina Wainscott has always loved the combination of suspenseful chills and romantic thrills. Her new series is about five Navy SEALs who take the fall for a covert mission gone wrong and join The Justiss Alliance, a private agency that exacts justice outside the law. www.tinawainscott.com

The Colony: Genesis by Michaelbrent Collings

The Accident by Chris Pavone