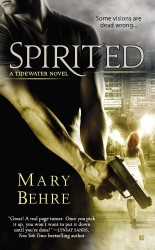 Allow me to introduce you to Mary Behre.

Mary is the lone female in a house full of males and the undisputed queen of her domain. She even has the glittery tiara to prove it. She loves stories with humor, ghosts, mysteries and above all else, a good romance. When not writing, she enjoys reading, gluten-free baking, and hanging out at the beach with the most important men in her life, her family.

Her debut paranormal romance, SPIRITED (Tidewater Novel #1) was an award-winning manuscript before it sold to Berkley Sensation. The Tidewater Series is mix of humor, suspense, and a psychic love-connection. The first three stories are about three sisters separated years before in the foster care system. As they search for love, each other, and a way to live with their psychic abilities, they’re tossed into the middle of mysteries that only their unique gifts can help solve.

Look at what PUBLISHERS WEEKLY had to say about SPIRITED: “Behre’s exuberant debut paranormal romance is lighthearted and easygoing, with a slow-moving subplot that promises to spark future books.”

Mary, tell us a little about SPIRITED.

Hi Basil, thank you for inviting me to talk to THE BIG THRILL about my debut novel. SPIRITED is full of ghosts, love and mystery. Jules is a psychic who wishes she wasn’t. Seth is a cop out to repair his tarnished reputation. They’re repeatedly thrown together by a ghost on a mission to help solve a murder before another person dies:

She’s running from who she is…

All Jules Scott wants is to live a normal, quiet life–preferably one that doesn’t include ghosts. Jules’s talent for communicating with the dead has brought her nothing but trouble. Despite her best efforts, needy spirits always find her and draw her into their otherworldly drama. When one implicates her in a series of deadly crimes, she may need to entrust her secrets to the person least likely to believe her…

He’ll do whatever it takes to catch her.

Detective Seth English can’t get distracted from the big case he’s working on, not even by his alluring new neighbor. He doesn’t believe that Jules had anything to do with the string of robberies-turned-murders that he’s investigating, but when she keeps showing up in all the wrong places, his gut tells him she knows more than she’s letting on. To solve his case, he’ll need to expose what the sexy redhead is hiding–no matter how impossible the truth may be…

Jules is a very interesting character, was there a particular inspiration for her creation?

Not exactly. I rarely come up with characters or plots first. What I usually visual in my head is a scene. For me, it was that first meet scene between the hero and the heroine. In my head, I saw some woman dressed as a clichéd hooker crawling through some stranger’s bedroom window. Not sure what put that thought there, but it was there. And I wondered, because I knew from the start she wasn’t a prostitute, why would a woman who wasn’t a prostitute dress like one and crawl through the bedroom window of a police detective. Since I’m more of pantser than a plotter, I had to write the scene to find out. Then I wanted to know more about the ghost, the detective and the not-really-a-hooker but a florist instead. The story built from there.

Have you always been attracted to the paranormal?

I’ve always been attracted to paranormals and mysteries. Growing up one of my favorite authors was Agatha Christie. I loved reading her books and trying to figure out the killer before the big reveal. The first time I did it was in the novel, THE MIRROR CRACK’D FROM SIDE TO SIDE. As I expanded my reading lists to include paranormal stories, I found while I enjoyed vampires and shape shifters, I really enjoyed the psychic elements in stories. So many different psychic abilities and so many different ways for this abilities to assist or inhibit an investigation.

What prompted you to start writing and when did you decide to put that first novel to paper?

I cannot remember when I started writing the first time. I wrote short stories or novellas in high school and college. Then life led me down a different path for a number of years. It was not until after my first child was born, that my sister and our best friend, encouraged me to start writing again. I wrote my first full-length manuscript in 2006. Then I promptly put it away and took workshops on craft and wrote two more novels. The third novel I finished in 2012, was SPIRITED. Since then, I’ve written a fourth, GUARDED, which will be released in August of 2014. Today, I’m working on book five, ENERGIZED (working title). All three novels are set in Tidewater and involve humor, suspense and a psychic love-connection.

And now for the deep philosophical question that burns in the minds of all our readers. If a Genie suddenly appeared in front of you and told that every meal you ate for the rest of your life would always taste like the next meal you ate, and you could choose anything you desire for that meal but had to eat the entirety of what you chose, what would you choose?

One meal for the rest of my life? Then I’d choose chocolate. Life just isn’t complete without it.

Thank you again for having me as a guest in this month’s edition of THE BIG THRILL.

Mary Behre could never decide on her favorite genre, paranormal, mysteries or romances. So it only made sense that she combined all three in her books. Her debut novel, SPIRITED, is the first in the Tidewater Series. Stories with humor suspense and a psychic love-connection. When not writing in her closet/office, she can be found hanging out with the most important men her life, her family.