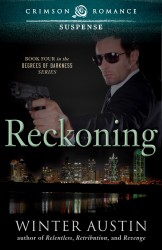 For those of us who have been in the publishing industry long enough we’ve all heard the old adage: “write what you know.” It’s a motto many authors have used, writing novels that reflect their careers, past or current. In certain ways, I’ve done the same with my Degrees of Darkness series.

But what made me write the four book series wasn’t what I knew; it was what I wanted to read.

I’m probably the worst person on earth to take to a bookstore, something of which my husband thoroughly enjoys doing even though it means standing for a few hours waiting for me to find that right book I want to take home. I flit from one part of the store to the next, one genre to another, grousing about not finding that book containing the right mix of all the things I love. My tastes are at the whim of whatever I feel like reading and more times than not I cannot find the right book and resort to the tried and true; buying a writing craft book. I’ve also noticed my oldest son has this “indecision” gene.

In the early stages of my path to getting published, I was meandering through my local library trying to find a book that had what I wanted. I’m an odd duck, who wants to read a book with a character or two that has a profession in the Agricultural world, a few cops, a setting that is rural, romance, murder, a lot of action—and not always the kind that happens in bed—and an antagonist that makes your skin crawl. No luck. Fed up, I left empty handed and decided now was the time to write the book I wanted to read.

Thirteen years and countless different revisions or versions I wrote that book. RELENTLESS, book 1 of the Degrees of Darkness series, was published under the genre heading of Romantic Suspense, but readers have labeled it as a mix of romance/suspense/mystery/thriller. What a mouthful, but true. While I was writing it I didn’t really pay attention to what genre label I was going for. I just wanted a book that had a realistic romance between the characters that held a mix of mystery with the suspense. I’m not into letting my readers know who the antagonist is until one or both of the main characters find out, something that most suspense novels don’t follow. But I had one more element that I wasn’t expecting, action. The kind of action you’d see play out on your favorite thriller movie.

I had done what I set out to do. And oddly enough, I was able to do this and leave the romance plot open to follow the hero and heroine through the whole continuancy series. Now to follow-up with the three remaining books. Agonizing over how to keep my antagonists a secret led to many days and weeks of moaning and groaning to my agent and my brainstorming partners on how to do it. Eventually, each plot for each book worked out.

The final book in the series, RECKONING, releasing March 31, tied up loose threads for the heroine’s life. And I had to work my magic in a way that frankly scared me, because at this point I was trying to create a romantic conflict for a married couple that didn’t make them sound dull, and appeased my romance readers. All of this was happening on a background of ever increasing danger, with an antagonist I didn’t want the reader to see coming. With my editor’s help, I pulled it off, combining all of the elements that I had used so far; romantic suspense/mystery/thriller.

During this time I was hit with a reality check; the Degrees of Darkness series was over and now I had to figure out who I was as an author. For a few weeks I went back and forth; talked with my agent about it, reading books in my favorite genres, gleaning what I needed to know about myself, and coming to the point where I wanted to smack my head against a wall. Which led me back to the same library, in the same situation, fifteen years later. I couldn’t find that book to read that held the right mix of what I wanted to read. And this time I had a solution; “I’ll go write the book I want to read.”

All four of my books in the Degrees of Darkness series are books I tend to go back and read through on occasion. And I truly enjoy what I wrote; my favorite of the series being book 3, REVENGE, because of the setting and the focus on the hero and his past. RECKONING, book 4, was bittersweet in writing and publishing, as it finalizes the storylines of both the main characters—characters who have been with me a long time. But it’s time to move on to a new book and a new set of characters.

And as usual, I’m back at it, combining all my favorite genres in one big mash-up. Writing a book I want to read, and hopefully a book many more want to read. 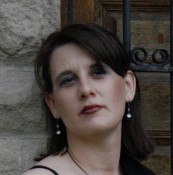 Winter Austin resides in the mid-west with her Beta Hero, four mind-boggling kids, and a bevy of pets. When she’s not trying to kill her characters in some form or fashion she can be found in the kitchen creating another culinary delight.

To learn more about Winter Austin and her novels please visit her website.