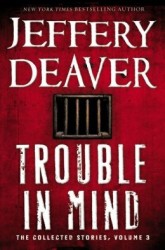 NEW YORK TIMES bestselling author and highly acclaimed storyteller Jeffery Deaver-the undisputed “grand master of the plot twist” (Booklist)-returns with a dazzling new collection of short stories. In these twelve electrifying tales (including six written just for this anthology) Deaver proves once again his genius for the unexpected-in his world, appearances are always deceiving.

A devoted housekeeper embarks on a quest to find the truth behind her employer’s murder. A washed-up Hollywood actor gets one last, high-stakes chance to revive his career. A man makes an impulsive visit to his hometown, and learns more about his past than he bargained for. Two Olympic track hopefuls receive terrorist threats. And Deaver’s beloved series characters Lincoln Rhyme, Kathryn Dance, and John Pellam return in stories now in print for the first time.

“In Mr. Deaver’s kaleidoscope world, the odds seem to change with each turn of the page.” ~THE WALL STREET JOURNAL

The author of two collections of short stories and 28 previous suspense novels, Jeffery Deaver is best known for his Kathryn Dance and Lincoln Rhyme thrillers, most notably The Bone Collector, which was made into a feature film starring Denzel Washington and Angelina Jolie. His many awards include the Novel of the Year at the International Thriller Writers’ Awards in 2009 for his standalone novel The Bodies Left Behind. The latest entries in the Lincoln Rhyme series are The Cold Moon, The Broken Window, and The Burning Wire.

Deaver has been nominated for seven Edgar Awards by the Mystery Writers of America, an Anthony Award and a Gumshoe Award. He was recently short-listed for the ITV3 Crime Thriller Award for Best International Author. His books are sold in 150 countries and translated into 25 languages. He lives in North Carolina.

To learn more about Jeffery Deaver, please visit his website.