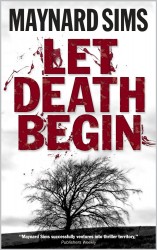 LET DEATH BEGIN is the tenth published novel of writing duo Maynard Sims, and with another eight scheduled they are keeping busy. Thrillers are their favourite storyboard, be it supernatural or action. LET DEATH BEGIN is a mystery thriller set in the modern day around London, England. James Price is shot by a clown. Sara’s house is broken into. Mason is killed for what was stolen. Who is pulling the strings? Who wants James dead? What secrets do Sara and her brother need to stay hidden.

The story was inspired by the gangsters that held London to ransom. Unafraid of the police, and interested in power at whatever cost. In LET DEATH BEGIN two rival crime lords —Dyson and Moss — continue their battle even after death. Their families and loved ones are dragged into the bitter rivalries and thirst for revenge that threaten more lives.

James Price is involved whether he likes it or not. He is just coming to terms with being invalided out of the police after being shot when his new life of peace and quiet is shattered by his involvement with Sara. Her father was one of the crime bosses, and his secrets haven’t been buried with him.

Maynard Sims are the authors of ten novels with six more scheduled, as well as writing short stories, screenplays, novellas and essays. They have been editors and publishers.

To learn more about Maynard Sims, please visit their website.