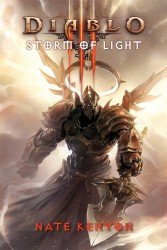 Nate Kenyon, author of eight novels and dozens of short stories in the horror, thriller, and sci fi genres, is back with DIABLO III: STORM OF LIGHT, another exciting adventure set in the world of the popular DIABLO video game series.

Full of a rich mythology, the DIABLO series offers much in the way of fantasy and adventure.

This time around, as Tyrael searches within himself and the Heavens for reassurance, he senses the Black Soulstone’s grim influence on his home. Where harmony of light and sound once reigned, a mounting discord is threatening to shroud the realm in darkness. Drawing powerful humans to his side from the far ends of Sanctuary, Tyrael reforges the ancient Horadrim and charges the order with an impossible task: to steal the Soulstone from the heart of Heaven. Among the champions entrusted with this burden are Jacob of Staalbreak, former avatar of Justice and guardian of the angelic blade El’druin; Shanar, a wizard with phenomenal powers; Mikulov, a lithe and reverent monk; Gynvir, a fearless and battle-hardened barbarian; and Zayl, a mysterious necromancer. With time and the forces of both good and evil against them, can these heroes unite as one and complete their perilous mission before Heaven falls to ruin?

Nate and I caught up recently to discuss the mythos of the DIABLO series and what it’s like to adapt a popular gaming experience for readers.

For those who aren’t familiar with the DIABLO games, can you give us a little background about its mythology?

DIABLO takes place in the world of Sanctuary, similar to earth in the Middle Ages. Sanctuary is a battleground for the forces of light and dark—angels, who live in the High Heavens, and demons, who populate the Burning Hells. Humans were created through a union of angel and demon, and Sanctuary became a place where they were protected and allowed to grow and thrive—until that protection is threatened by the rulers of the Hells. Angels don’t particularly like humans either, believing they are abominations and threats to the existence of the Heavens. Although most humans aren’t all that aware of the demons lurking in the darkness, Sanctuary is a place filled with magic, and special humans, called nephalem, have tremendous abilities that may be even greater than angel or demon—and they must use these gifts to strike back against the demonic forces that invade their lands.

How did you first get involved in writing for the world of DIABLO?  Were you a fan of the games prior to working on the books?

I was contacted by Blizzard Entertainment’s creative team and asked if I was interested in working with them. They had read an earlier sci fi novel I’d written called PRIME and thought I might be a good fit for a project they wanted to do called STARCRAFT GHOST: SPECTRES. We were all pleased with how the book turned out, and so they asked me to write the next DIABLO novel, which was called THE ORDER. That was released in 2012, followed by the new one, STORM OF LIGHT, released this month.

I’m not a huge gamer, but I was familiar with DIABLO from when I was younger, and of course I knew about their other game franchise, WORLD OF WARCRAFT. I had some concerns going into that first project whether I could pull it off without knowing the games inside and out, and so I spent six months immersing myself in the STARCRAFT world—reading every prior novel and comic, talking to fans, playing the game, talking to Blizzard. I did the same for the DIABLO novels.

Can you tell us a little about what it’s like to expand on the mythology created in the games?  What are some of the challenges and rewards?

It’s tremendously rewarding. DIABLO has legions of fans that all live and breathe this world, so being able to contribute to it is a thrill. For example, Deckard Cain (the hero of my DIABLO novel THE ORDER) is an iconic character, beloved by fans and having appeared in all the games. But nobody knew his history, how he had come to be the man he was, and in my novel I was able to create that, to explain what had happened to him and why he became that man. On the other hand, I have to work within a very specific set of guidelines, and everything I do has to be approved by the Blizzard team. Sometimes they make changes to a game they’re developing that affects my novel, so I have to rework things to fit. And of course if I get something wrong, the fans will let me know. Luckily Blizzard has a fantastic lore team that helps correct any errors I might make during the writing process.

Did your previous work in horror and thriller help you transition into these stories?

Yes, absolutely. I think Blizzard was initially attracted to working with me because they wanted to take their novels in a darker direction, and I seemed like a good fit. Even though these are novels based in a video game world, they’re still horror-thrillers. Writing the story isn’t all that different, other than working with someone else’s general plot guidelines.

What are you working on now?  Are there any plans for future DIABLO books?

I’m outlining a new thriller right now, planning on beginning a new series character that should be a lot of fun. I’m sure we’ll do another DIABLO novel, although we don’t have a plot yet. We’ll start talking about that this spring.

I’m looking forward to it.  Thanks for taking the time to check in.  Now if you’ll excuse me, I have some gaming and some reading to do. 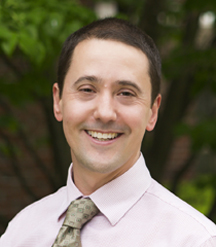 Nate Kenyon is the author of eight novels and dozens of short stories in the horror, thriller and sci fi genres. His first novel, Bloodstone, was a Bram Stoker Award finalist and won the P&E Horror Novel of the Year. The Reach, also a Stoker Award finalist, received a starred review from Publishers Weekly and was optioned for film. Kenyon’s novels StarCraft Ghost: Spectres, Diablo: The Order, and Diablo III: Storm of Light are based on Blizzard’s bestselling video game franchises. Kenyon’s latest original thriller is the Day One from St. Martins Press.

To learn more about Nate, please visit his website.