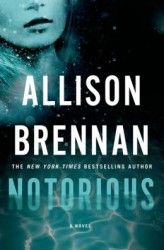 In a starred review, BOOKLIST dubbed her latest work the start of “a terrific new series.” Nine years ago, Brennan traded politics for publishing and has since become the author of twenty-three acclaimed romantic suspense novels. Yet she doesn’t take success for granted, and is always working to up her game, with novellas, short stories, and soon, hardcover heroine, Maxine Revere.

The biggest challenge was overcoming my own fear. It’s a huge step for an author, and an important one in the mystery/thriller world. Independent bookstores, vital to hardcover authors, don’t usually carry my mass market originals, so having NOTORIOUS in hardcover is also about breaking into new markets. Fear of being reviewed—in mass market originals, I was very comfortable. I knew what to expect. I had reviews in a couple places, and except for RT Book Reviews they were all after the book came out. With hardcover there are more reviews and more potential criticism—most of it before the book even comes out. Then panic that the book wasn’t good enough, that readers would hate my character, etc. But … because I’m a writer first, I found ways to push through all the self-doubt and write.

Was there any debate between you, your agent, your editor, on whether or when to shift format?

When my agent and I talked about moving to hardcover, we first talked about the Lucy Kincaid series. But because Lucy started as a mass market original series, I didn’t really want to move her into the hardcover format. I had the Max Revere character in my back pocket—I conceived her in 2010 and knew that she would be my hardcover character when the time was right. Moving the Lucy Kincaid series to Minotaur, who are known for their hardcover mysteries and thrillers, was the first step. After three Lucy books with them, we all felt that now was the time to break out into hardcover with a new series.

Your new heroine, Maxine Revere, is an investigative TV reporter (a profession close to my own heart as a journalist and author). What made you choose that occupation for her?

Almost every major character I’ve written has been in law enforcement. I wanted a protagonist who didn’t have to follow rules and procedure. I wanted a snoop. Someone who was driven by curiosity more than justice. Max is driven to seek out the truth, even when it’s not pretty, even when it’s dangerous. And while she has a respect for law enforcement, she’s seen the dark side as well. Most of my Lucy books have a favorable impression of cops and the justice system. Max is far more cynical and isn’t going to kill a story to protect anyone. Plus, as a writer I understand writers. As far as Max being a journalist, I made her independently wealthy. While there are many reasons for this, one of the benefits is that she isn’t dependent on income and a job from a rapidly changing profession. That enables her to push more envelopes.

Tell us about your new protagonist.

Max and Lucy are similar in some ways—they both seek answers, they both hate injustice, they both like to solve crimes and puzzles. They are both driven by events in their past—Lucy had been raped when she was eighteen, and Max’s college roommate was murdered when they were twenty-two. These events define them in many ways. But they are more different than alike. Max is a few years older than Lucy, she’s far more worldly, she’s extremely confident to the point that some people find her arrogant and difficult (primarily because she’s a woman with some masculine traits. Remember that Philippines Pantene commercial? Max would fit in with those women.) Max is also more sexually confident than Lucy, is aware that men find her attractive and isn’t above using all her assets—her brain or her sex appeal—to get answers. Max doesn’t care what people think about her, most of the time. She’s also lonely but doesn’t make close attachments with most people (for reasons that go beyond the murder of her best friend. For example, her mother left her on the doorstep of her rich grandparents when she was ten and never came back. Her mother lied to her about who her father was, so she has no idea about half her genetic make-up, which frustrates her in ways she doesn’t understand.)

What does your new series mean for Lucy Kincaid?

First, I’m still writing the Lucy Kincaid books. Lucy has her world and Max has her own world as well. I doubt they’ll ever intersect; at least I have no plans to!

You have a big family, yet are a prolific author. How do you get so much writing done with such a full house?

I have five kids, but my oldest is 20 and away at college and my number two daughter is a high school senior! My others are 13, 11, and 10 … and they keep me busy, too. I have my own office, and they have to go to school. It’s the law! LOL. I keep my writing time sacred. When they are at school, I’m writing. When they’re home, I’ll help with homework, play games, take them to sports practice, go watch their games, whatever needs to be done. And, I write at night. I don’t have a lot of outside hobbies … um, none. Everything I do either relates to my writing or my kids. It keeps me busy, but that’s okay! Life’s too short to be bored.

Because of subject matter, at what age do you allow your kids to read your books?

I told my kids they can read my books when they’re in high school. Believe me, I read far racier and violent books! However, my two teenage daughters still haven’t read anything I’ve written. I don’t know if I should be grateful or insulted! My seventeen year-old is a talented writer and artist, and she also reviews YA books for RT … so I don’t know if I want her to read me. I don’t think I could take the criticism from my own daughter.

Does your husband ever get ribbed by his friends about your plot lines or racy scenes?

When he worked in the state capitol, yes, a bit. I remember once he walked into his boss’s office (he worked for a senator) and there were several other legislators sitting around talking about page 187 in my debut novel. Dan asked, “What’s page 187?” And the guys looked around and smiled. “Right, you haven’t read the shower scene,” wink wink.

Another colleague cornered Dan in the hall after a committee hearing and said, “I just read Allison’s book, THE HUNT. It was really violent. Aren’t you worried about her?” Dan, after realizing this guy was seriously concerned about my mental health, leaned over and with a straight face said, “I wasn’t, but then I read the opening chapter of her next book. She castrates a guy.”

You have written novellas featuring your series characters. How important has that been to your success?

Novellas are fun to write, and they give me a bit of a breather from the longer, more complex and plot-heavy books. Novellas have also taught me to write cleaner, tighter stories. I don’t know that they’ve been important to any success, but they haven’t hurt. I like giving readers bite-sized stories between books. It satisfies me, and I hope it satisfies them.

Is it a special kick to see your novels, not just in bookstores and libraries, but also in grocery stores?

I still get a thrill with every book. But I don’t want anyone to know. When I check on my books at Target or the grocery store, I’ll walk by casually, pretending to browse, and when I spot my cover I get that little jolt in the pit of my stomach. I hope it never goes away! 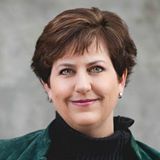 To learn more about Allison Brennan, please visit her website.