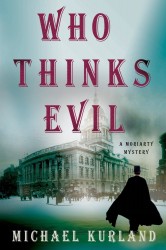 Michael Kurland’s latest novel, WHO THINKS EVIL, represents the fifth in his series featuring Sherlock Holmes’ famed nemesis, Professor James Moriarty.Moriarty is awaiting trial for murder when Queen Victoria’s grandson mysteriously disappears. In exchange for his release and the murder charges (of which he’s innocent) being dropped, the so-called “Napoleon of Crime” must track down the missing prince and find out who is behind his disappearance and the brutal murders left in his wake.

I recently checked in with Michael to learn more about how this series came to be and where it is going from here.

WHO THINKS EVIL is told from the point of view of Sherlock Holmes’ archenemy James Moriarty.  How did this series begin?

This is the fifth novel in the series, along with a bunch of short stories.  It began when Bernie Geis, a New York publisher, needed someone to ghostwrite some star’s autobiography.  My agent recommended me and sent along a sample of my writing, including the portion and outline of THE INFERNAL DEVICE, the first Moriarty book, which I’d been thinking of submitting to the paperback house that had published a bunch of my science fiction novels.  Bernie loved that so much that he bought it for vast amounts of money—at least by the standards of someone who’d been writing paperback science fiction—and found someone else to do the ghosting

THE INFERNAL DEVICE was nominated for an Edgar and an American Book Award, which made me think that perhaps science fiction wasn’t my field after all.

Do these stories take place in the same context as Doyle’s Holmes books (parallel stories) or are they set in their own time and place apart from the original series?

They take place in the World of Sherlock Holmes, but they do not spring from or tie into any of Conan Doyle’s stories except for the use of some of the same characters.  My major conceit in my stories is that Moriarty is not the super-villain that Holmes believes him to be, but is more of a Robin Hood—stealing from the rich to give to the poor, and to support his scientific experiments.  Holmes has a warped view of him because he’s the only man—and certainly the only villain—he’s ever dealt with who is as smart, and perhaps just a smidgen smarter, than he is.

I imagine that writing about late 19th century London requires a lot of attention to detail.  How do you go about researching information for a period such as this that no longer exists?

I have at least 20 books on the period, but I try not to wave my research in the reader’s face.  My hope is that no one will catch me out in any glaring errors.  But if anyone does spot any anachronism please let me know so I’ll do better next time.

Do you think you will explore more Moriarty stories in the future?

I may well do one or two more Moriarty’s, I enjoy writing in that world and I have an idea for the next one.  But at the moment I’m working on a novel tentatively called THE BELLS OF HELL, that’s set in the late 1930s and might be called a political thriller, although I hate pinning anything down to a particular genre.

In addition to WHO THINKS EVIL, and THE INFERNAL DEVICE, other works in the Moriarty series include: THE EMPERESS OF INDIA, DEATH BY GASLIGHT, and THE GREAT GAME. 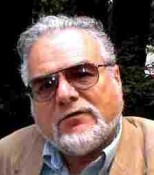 Michael Kurland writes fantasy, sf, and mysteries with equal hubris. He has received two Edgar scrolls and an American Book Award nomination. Among his works are THE INFERNAL DEVICE, THE LAST PRESIDENT (With S.W. Barton), DEATH BY GASLIGHT, TEN LITTLE QIZARDS and THE UNICORN GIRL. His books have been translated into Chinese, Czech, Danish, French, German, Hungarian, Italian, Japanese, Polish, Portuguese, Russian, Spanish, Swedish, and some alphabet full of little pothooks and curlicues. Kurland presently lives in a Secular Humanist Hermitage in a secluded bay south of San Francisco, where he kills and skins his own vegetables.