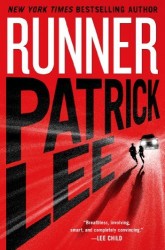 Patrick Lee burst onto the thriller scene in 2009 with his explosive bestseller THE BREACH, which was billed as a cross between the T.V. shows 24 and X-FILES and was compared to the works of Dean Koontz and Michael Crichton. Bestselling author Lee Child called it “audacious and terrifying—and uncannily believable.”

After two sequels, Lee is back again this year with RUNNER, the first in a new thriller series—and this one promises to be his best yet:

Sam Dryden, ex-Special Forces, lives a quiet life in a small town on the coast of Southern California. Out for a run in the middle of the night, he encounters a young girl named Rachel, who is running for her life from a group of armed men. Dryden helps her escape, and soon learns that Rachel has an ability that should be impossible, and which makes her a target for people who can move heaven and earth to find her.

The Big Thrill sat down with Patrick to learn more about the new novel and his writing life.

RUNNER begins with one of the most compelling scenes in recent memory—a man out for a run at night who encounters a young girl trying to escape from men who want to kill her. Was that scene where this story first began in your mind—your “what if” moment—or did it come later during the writing process?

In the case of this book, it really did begin with this first scene, and at the time I didn’t know where else it was leading.  As I got a few chapters further along, and came up with the premise of the book, I made changes in chapter one that would hint at it.  But yeah, in the beginning I just had this opening, by itself.  I usually try not to outline stories; I still get a sense of where they’re going, in my head, but I really don’t write anything down.  I try to let the book go where it wants to, as I’m writing it.  The important counterpart to that approach, though, is that I’m constantly going back and revising the earlier material to fit any twists and turns that show up later on.  So it ends up looking like the result of a fairly involved outline.  I guess you could call it retroactive outlining.

There seem to be two distinct approaches: the outliner and the “pantser” who explores as he/she goes. Do you feel that your approach helps you be more creative, and how do you handle it when you hit a wall and don’t know where to take the story next?

You do hit lots of walls when using the seat-of-your-pants approach.  You might find yourself stuck for a few days, or sometimes longer, on a scene.  But I usually find that getting past the wall involves coming up with an angle of the story that I probably wouldn’t have thought of otherwise.  In hindsight I’m always happy about it, but yeah, when you’re stuck it’s not much fun.

Tell us a little bit about your early life. What inspired you to become a writer? What kinds of books did you grow up reading?

It’s hard to say where the drive to write initially came from; I know I always liked creative writing assignments in school, as far back as I can remember.  And I know I daydreamed a lot in class, which used to get me in trouble, but which these days is a big part of my career—it would’ve been nice to know that back then. As far as authors I read growing up, Stephen King and Dean Koontz were huge influences. So was Michael Crichton. I love any story in which there’s one very strange thing, and everything else is played as realistically as possible.

You use that to great effect in your own work. THE BREACH is a breathless mix of weird science and non-stop action, and RUNNER continues the tradition. Do you have plans to write more in either world?

I’m definitely planning to continue the series that starts with RUNNER.  The main character, Sam Dryden, seems like a guy who’s bound to run into interesting trouble on a regular basis.  With the BREACH series, I’m pretty happy with how it’s wrapped up for now.  I loved working on those books, and I like how the series stands now as a trilogy.  They say you should never say never, but I’d say I’m leaning away from exploring it further.

You sold two screenplays to Hollywood before you wrote your first novel. How did that experience shape you as a writer?

It gave me an appreciation for the differences between screenplays and novels.  It’s tough to say which is harder to write: novels are longer, but the structure is much more flexible, more free.  For me, books have been more fun to write, because the process feels more immersive than writing scripts, though that’s probably something that varies between people.

Did your screenplay experience help you when it came to writing dialogue and plotting novels?

I’m sure it helped with dialogue, and maybe with story structure too.  Screenplays have to be pretty tight, so working on them is probably a great way to learn to keep scenes short and spare.

Are you planning on writing more screenplays? Any film projects in development based on your novels?

For now I really don’t have any plans to write screenplays again, though down the road, if some idea came to me that seemed more like a movie than a book, I could imagine taking a crack at it.  Ha—there’s probably always a book version, though.  As for film activity on my existing books, right now there are two of them in development.  THE BREACH has been optioned by David Goyer.  He’s attached as a producer, and it sounds like the screenplay is taking shape.  With RUNNER, the rights are at Warner Brothers with Michael De Luca and Pouya Shahbazian producing.  Adam Cozad (JACK RYAN: SHADOW RECRUIT) is writing the script, and Justin Lin might be directing (fingers crossed).

RUNNER is getting a big push from your publisher and early reviews seem extremely positive. Did you know as soon as you finished this one that you had something special?

To be honest, I really never know how others will feel about a book when I first finish it.  At that point, my objectivity to the book is pretty much exhausted.  After enough time goes by, I have a better sense of how I feel.  And it’s really, really nice to hear positive reviews.  I’ve been very excited about the response to RUNNER.

What do you like to do when you’re not writing the next big bestseller?

I read a lot, and it’s great spending time with friends and family.  I also follow politics probably more closely than I should; it’s a good mix of aggravation and entertainment.  It’s like a reality show in which the outcome affects all of our lives.  Which is pretty scary.

How can fans connect with you? Are you active online? How about a book tour—will you be promoting RUNNER this spring?

The two main places I’m active online are Facebook and my website.  I’m a lot more active on my Facebook page than on my site, and I should be updating both more often.  As for promoting Runner, I’ll definitely be doing some signings at bookstores around the time the book comes out.  I’ll post that info online sometime soon, and keep it updated as events are added. 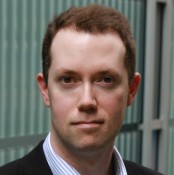 Patrick Lee lives in Michigan. In addition to Runner, he is the author of the Travis Chase trilogy.