Are two imaginations better than one?

For outsiders, the process of co-authoring a book seems quite mysterious, but in this interview, New York Times bestselling thriller author James Rollins and acclaimed historical novelist Rebecca Cantrell explain the mechanics of how their writing partnership works five thousand miles apart. Their nuts and bolts answers about sharing the chores and credit of crafting their thriller, THE BLOOD GOSPEL, will intrigue readers and writers.

THE BLOOD GOSPEL combines two popular literary themes – the Catholic Church and vampires – and nets this author team raves for their first joint endeavor about the hunt for a miraculous and forbidden book.  As SUSPENSE MAGAZINE put it: “It would be a sin not to read it!”

James, THE BLOOD GOSPEL smacks of secrets and the Catholic Church. How is it similar to the DA VINCI CODE and how is it different?

I think any book that touches upon Catholicism and proposes an alternate view of religious history, especially in regard to the life of Christ, is going to be compared to Dan Brown’s book.  And while I expect some controversy to be raised by the central theme of this series, I think Rebecca and I were careful to show all sides.  This book is both profane yet also deeply religious—not an easy line to tread.  It will be up to the readers themselves to decide how to ultimately cast this book:  Is it blasphemous or devout?

Rebecca, you’re best known for your Hannah Vogel series, how did your partnership with James Rollins come about? Whose idea was it for this series?

Jim had the idea, some pages, and a rough outline when he approached me. I met him at the Maui Writers Conference a couple of years before, and we’d kept in touch via email and at various conferences (like Thrillerfest) since. So, he called me up and said he had this great idea for a book and asked if I was interested.

When I asked what it was about, he said it was confidential, and he couldn’t really tell me. After I asked if he could answer yes or no questions he just caved and told me about a sect of vampires who live as priests hidden within the Catholic Church and subsist on transubstantiated wine. I was pretty much sold right there, because the idea was too cool to resist.

James, what do you think of the trend of big-name authors using co-authors to write multiple books?  What made you want to collaborate on your new series?

I don’t particularly have a strong opinion one way or another.  I judge a book by the story and the skill in which it’s told—not by the number of names on the cover.  Personally, my decision to undertake a collaborative process had nothing to do with producing more books per year. Instead, what drove this process was simply a desire to bring this story forth in the best possible light. I knew this book needed not just my storytelling ability, but someone who could bring a gothic mindset to the project.  So I looked for someone to pair up with, someone who could complement my skill set with their own.

Back when I was teaching a writer’s retreat where Rebecca Cantrell was a student, I was struck by the richness of  her descriptions and her ability to craft atmosphere. Over the years, I followed her award-winning career and watched her craft become even more honed. So when I sought a writer who might be able to bring that gothic element to the story, I knew she’d be a perfect fit.

Rebecca, what are your logistics for co-writing a novel?  Do you alternate chapters? Do you write first draft and he revises? Who handles research?  What’s your system? After all, he lives in California, you in Germany. 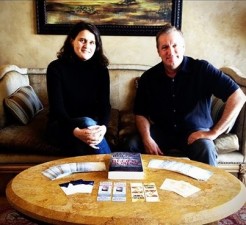 We don’t alternate chapters. Some stuff I first draft, and some stuff he does. Then we trade them off and talk about them. One of the things we did at the very beginning was spend a lot of time sorting out the world, including creating a world bible with information about each character, details of the world, and tone. Before we started on the book, we wrote scenes in various styles until we found the style that suited the story. It’s not strictly my style or his, it’s a third style.

Research? We each research our own scenes, and then double check each other’s. Now that I write that, I see how inefficient it is, but it does work. And it lets us have tons of cool discussions about theology and how to kill an enraged black bear and historic landmarks we can blow up.

Logistically, we send pages out every Friday and Skype for a couple of hours on Monday (his morning, my evening). If something comes up in between, we sort it out via email. I don’t know how we’d do this without the Internet.

James, after writing solo successfully all these years, what were the challenges of collaborating?

It certainly was a learning curve, especially about how to be “open” at the depth necessary to share a story.  Prior to this project, writing has been a solitary experience, where the best and worst could be kept under wraps and dabbled with in private.  It took a while to reach that stage with each other where we could drop our guards with one another: to be brutally honest, emotionally sincere, and willing to trust.  But I think any true collaboration has to cross that Rubicon.

Rebecca, what was the hardest part about being a co-writer?

The writing part was, and is, wonderful, but the rollout has been a challenge. I didn’t know this when I started, but lots of places don’t even bother to list the second writer on the book—many libraries, some bookstores, etc.

Jim has worked overtime to make sure that I get credit everywhere that it’s possible, which I very much appreciate, but it’s still difficult working in a system where the second author is so often invisible.

Rebecca, both of your names are on the cover. Would you have agreed to collaborate if it had been a ghost-writing deal in which you would not get cover credit?

Until the rollout happened and I knew what it felt like to not get credit for a book I worked so hard on, I would have said that I could ghost write without a problem. Now, I’m not so sure.

James, if you could change one thing about Rebecca Cantrell, what would it be?

I wish she’d stop being right quite so many times.  So often during this writing project, I would question something she proposed doing to a character or to the plot, voicing doubt, daring her to prove me wrong—which, of course, she would succeed in doing.  This happened with great regularity.  I had to eat a lot of crow.

Rebecca, if you could change one thing about James Rollins, what would it be?

I’d like him to be better at taking and receiving compliments. Usually when he critiques my stuff, he’ll say something like “This is all fine, except for right here.” Fine? Really? And if I start to say something complimentary about his stuff, because I think it’s just as important to know what you’ve done right as what you’ve done wrong, he gets this “yeah, yeah, yeah, next!” look in his eye.

I know that’s pretty minor, but that’s because he’s so damn smart and easy to work with. And, for the record, he has gotten better at giving praise, but no better at receiving it.

James, your first career was as a veterinarian. Did you ever consider writing cat mysteries instead of action thrillers?

Cats?  Why do cats get to solve all of those mysteries?  In my last Sigma thriller (BLOODLINE), I created the team of Captain Tucker Wayne and his stalwart sidekick, Kane, a military war dog. I even wrote several scenes from the dog’s perspective.  I thought it was high time for canines to get their moment in the literary limelight!

James, so what made you want to reinvent yourself as a novelist?

I never considered writing as a real career.  I thought you had to have some literary pedigree to be a successful author.  So instead I turned to my other passion:  veterinary medicine.  But I made one mistake.  I continued to read—and that little twisted corner of my imagination never fully died away.  Eventually I began to write.  My clients would ask me at the time, “So Dr. Jim why aren’t you writing something like James Herriott’s ALL CREATURES GREAT AND SMALL?”  My answer was simple:  not enough people die in those James Herriott novels.  I wanted adventures and thrills.  I was working fourteen hours a day as a vet.  I didn’t want to go home and write about a vet.  So instead I wrote about historical mysteries, scientific intrigue, and adventures set in exotic locales.  I basically let that twisted corner of my imagination loose on the world.

Rebecca, you started out as a technical writer. How did that help or hinder you from writing fiction?

Tech writing was great background for fiction writing. I was used to writing to a deadline, outlining my work, devoting time to research, and editing and being edited. That meant I could focus on story and creativity because I was used to the ‘background’ tasks of writing.

James, you dedicated THE BLOOD GOSPEL to Anne Rice. Why?

There are certain authors who shift genres, change lives, and become icons for generations.  Anne Rice certainly belongs in that pantheon.  I don’t think I could have told the story of Father Rhun Korza without first encountering Lestat and Louis in Anne Rice’s books.  She brought a literary touch to the vampire mythology, while blowing that myth apart and dragging it into the modern era.  It was only in the aftermath of her books, that THE BLOOD GOSPEL could be written.

Rebecca, you and James are working on THE BLOOD GOSPEL 2. Is the collaboration easier this round?

Yes, it’s much easier this time. I think we both have more faith in each other and the writing process together, plus we have developed at lot of shorthand. I know when he waves his hands, he is finessing something, and he knows when I roll my eyes I think that something is over the top. That saves time.

Rebecca Cantrell’s Hannah Vogel mystery/thriller novels have won the Bruce Alexander and Macavity awards and been nominated for the Barry and RT Reviewers Choice awards; her critically-acclaimed cell phone novel, IDRAKULA, was nominated for the APPY award and listed on Booklist’s Top 10 Horror Fiction for Youth. She and her husband and son just left Hawaii’s sunny shores for adventures in Berlin.

To learn more about Rebecca Cantrell, please visit her website.

James Rollins is the NEW YORK TIMES bestselling author of international thrillers, translated into more than forty languages. His Sigma series has been lauded as one of the “top crowd pleasers” (NEW YORK TIMES) and one of the “hottest summer reads” (PEOPLE MAGAZINE).