Jamie Freveletti is the best-selling author of five novels and at least one published poem. More on that, later. A Google search of her name nets me over 52,000 hits in two-tenths of a second. Just to put it into perspective, the same search on my name results in 7,570 hits, and about 7,500 of them are for someone else. This has presented me with a whole new problem when trying to put something original and interesting together for you to read about her and her latest thriller, Dead Asleep – too much information. What can I possibly add to the body of information already available?

Not a whole lot, as it turns out. Let’s see – we know she’s a serious runner. That’s been covered in every interview and on her web site. And her heroine in the four novels in the series, Emma Caldridge, is an ultra-marathon runner.

And she’s won, I don’t know, a dozen awards for her books and sold millions of copies. The people in charge of keeping Robert Ludlum’s name flowing cash tapped her to write the ninth book in the Covert-One series, THE JANUS REPRISAL, and it was an international best-seller. As KIRKUS REVIEWS said, “Freveletti turbocharges tension to non-stop levels.”

She’s degreed International Studies after an education in Geneva, and she practiced law before becoming a very successful lawyer.

But all of that is well-publicized, and I really wanted something new. So I pushed Jamie a little trying to get her to, you know, slip up and tell me something really embarrassing. Clearly, I was out of my league on that.

“Does anyone really give a damn if I like my steak well done and am a coffee addict? That I run for the sheer love of it, and that I am actively trying to adjust my brain to accept what I can’t change?”

Of course we do! You’re famous.

OK, so here’s something new – some of Jamie’s thought’s on Dead Asleep.

“DEAD ASLEEP deals with things that we think are fake, but science has proven to be possible. Kind of a switch up from the usual. I have Emma Caldridge the scientist dealing with superstition and some laws of science that are fascinating. Also some legends that we’ve taken as folklore, but that end up having a real basis in fact.”

For the three readers of this article who haven’t read one of the books in the series, either RUNNING FROM THE DEVIL, RUNNING DARK, and THE NINTH DAY, Emma is Jamie’s heroine and a biochemist. She’s already been through quite a bit before taking on paramilitary gun runners, Somali pirates, shady corporate magnates, and Mexican drug cartels. Not bad for someone who signed on to make better lipstick for her cosmetics company employer. So what’s left? Well, open DEAD ASLEEP and you’ll find sea monsters and ancient voodoo curses and all manner of rampaging evil.

“It also deals with an illness from history. While we all know about the Black Death and the millions of lives it took, I don’t think that we realize that in this century alone we’ve lost millions of lives to viral epidemics and they’re mutating all the time. One virus that is in DEAD ASLEEP (I’ll keep it under wraps, as it’s a spoiler) killed five million alone, but we’ve never really read about it, because those numbers pale in the face of the 17 million killed by the Spanish Flu, which came a year later. We have come so far, but we’re never going to control the microbes of nature completely.”

Let’s finally get to the cliffhanger I dropped in the second sentence. Poetry? Yes, it seems that Jamie got her start at the age of 11 when she had a poem published in an anthology compiled in conjunction with “The Carol Burnett Show.” I tried to get a copy for this article, but Jamie claims not to have one. I’ve read Jamie’s prose, and I really want to read the poetry. Anyone have a copy? 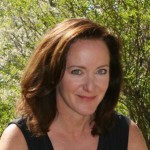 Jamie Freveletti is a trial attorney, martial artist, and runner. She has crewed for an elite ultra-marathon runner at 50 mile, 100 mile, and twenty-four hour races across the country, and holds a black belt in aikido, a Japanese martial art. After law school she lived in Geneva, Switzerland while obtaining a diploma in International Studies. Back in Chicago, she represented clients in areas ranging from class actions for mass salmonella poisoning to securities fraud. Her debut thriller, RUNNING FROM THE DEVIL, was chosen as a “Notable Book” by the Independent Booksellers of America, awarded “Best First Novel” by the International Thriller Writers, awarded a Barry Award for “Best First Novel” by Deadly Pleasures Magazine, and nominated for a Macavity Award for” Best First Mystery” by the Mystery Readers International and “Favorite First Novel of 2009” by Crimespree Magazine. It has been translated into three languages and was an international bestseller.

Her second novel, RUNNING DARK, released in June, 2010, hit both the Chicagoland and South Florida bestseller lists and the third novel in her series, THE NINTH DAY released in September, 2011 and was chosen as one of the “Best Thrillers of 2011” by Suspense Magazine.

In January, 2011, she was tapped by the Estate of Robert Ludlum to write the next in the Covert One series. That novel, Robert Ludlum’s THE JANUS REPRISAL, released on September 11, 2012. The fourth in her series, DEAD ASLEEP will be released on October 30, 2012.

The Colony by A. J. Colucci