Alma Katsu is back with her second book in the Taker Trilogy called THE RECKONING.  Her first book THE TAKER was named as one of the Top ten debut books of 2011 by the American Library Association.  Alma has been compared to the early works of Anne Rice, quite an accomplishment for a debut author.  We were able to talk to Alma about her trilogy and the challenges she faced when starting out as a debut author.

Your character Adair has been called “The 21st century Lestat.” Would you agree with this?

I have to admit to not being a Lestat expert, having only read INTERVIEW WITH THE VAMPIRE and not all of Anne Rice’s books with this character. From what I recall of him, I’d say yes, Adair seems to be cut from similar cloth even though he’s not a vampire. They’re both seductive, charming, calculating, selfish, cruel and doomed to suffer for their shortcomings. That kind of man is as irresistible as catnip to some readers—and I hope all of Lestat’s fans find their way to THE TAKER to check out Adair.

THE RECKONING is the second book in your Taker Trilogy. Is the action and emotion getting more intense?

THE RECKONING is very different from the first book in the trilogy. It’s more of a thriller. It’s basically a chase book: The heroine, Lanny, managed to trap the formidable and nearly unstoppable immortal Adair for two centuries. He finally is freed and is coming after her, intent on revenge. She must figure out how to stop him a second time, and figure out how to keep her loved ones safe from Adair as well. While there are flashbacks in history to some of the key moments in both Lanny’s and Adair’s lives, we’re much more in the present day, pursuer and the pursued.

Did you know when you first started thinking of the entire story that it would be a trilogy?

I wrote THE TAKER as a standalone. It took ten years to write and while I waited for my editor to get back to me with revisions, I began to miss the characters. A lot. And so I began to wonder what would happen next… and figured out how the entire story would play out. It seemed like an incredible adventure, these next two books, and I’m only beginning to see how ambitious the trilogy really is (especially the last book)!

Lanore is sitting in front of you, what question would you like to ask her?

Are you happy now? I can see her smiling knowingly.

Many authors say their first book was the easiest to write, because they had as much time as they wanted to write it, but the second was a lot more difficult because of deadlines. Was this the case for you?

I can’t say the first was easy because it had such tricky structural elements, but the second book was definitely a test of nerves. I had about twenty months to write book two and I owe a lot to my editor, Tricia Boczkowski at Gallery, who did a heroic job getting it to the finished state. She has amazing focus and dedication and, I think, improved my skills enough so that I’m not terrified to undertake book three.

In THE RECKONING what secondary character surprised you by having more of a voice then you thought they would?

Probably Luke’s ex-wife, Tricia (not named after my editor, by the way). Luke is the doctor who helps Lanny escape from the police and is drawn into Lanny’s secret world in THE TAKER.  Of all the characters, his ex-wife might be viewed as the sole voice of reason and beacon of sanity.

Why do you think your books are being compared to “vampire” novels, when you don’t have any vampires in them?

I think the element of immortality throws some readers for a loop. I’ve been told that they see the word “immortal” and they assume it has vampires in it. Also, the books are Gothic in flavor—full of dark emotions, the secret inner life—and I think that puts readers in mind of vampire stories. DRACULA is the classic Gothic novel, after all!

…because I was lying comatose in a hospital bed. Actually, I’m not one of those writers who would say she’d only stop writing if she were dead because I did stop writing for about fifteen years. I was a journalist and wrote short stories until I was in my mid-twenties and then gave it up to concentrate on my career as an intelligence analyst. I returned when I turned forty to see if I could learn to master something as complex and artful as writing a novel. So I know such things happen; I only hope that I don’t stop writing a second time

One book, one movie and one CD is all you can have, what would they be?

Right now, the book would be CASANOVA IN BOLZANO by Sandor Marai, the movie would be ORLANDO directed by Sally Potter and the CD would be ABSOLUTION by Muse. All are epic and lush; I think that says something.

Have you began to think about life after The Taker Trilogy?

Yes. I have been writing full-time for a year but I anticipate returning to the intelligence business, thought as a contractor or consultant this time around. As for writing, I have a spin-off from The Taker trilogy that I hope to complete; a YA that has no paranormal element whatsoever; and a fantasy that’s in the early stages. And ideas for about five other novels. I have the opposite of writer’s block: I can’t seem to stop thinking up ideas for new books.

We would like to thank Alma for taking the time to talk about her trilogy and her latest book The RECKONING available June 1st, 2012.  For more information on Alma, please visit her website www.almakatsu.com 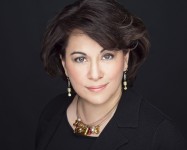 Alma Katsu’s debut THE TAKER, a novel of Gothic suspense, was selected an ALA Booklist top ten debut novel of 2011 and developed an international following. THE RECKONING, the second book in the trilogy, will be published June 19, 2012. Ms. Katsu received her MA in fiction from the Johns Hopkins University and is a former intelligence analyst.