Someone has stolen Charlotte’s unborn children. They also took the girl who was watching them.

Both of these things were a mistake.

Now Deacon Chalk, his girlfriend Tiff, and Charlotte the Were-spider are out for blood.

Tell us a bit about your latest Dark Urban Fantasy, SPIDERS LULLABY.  What an intriguing title!

I love the title myself, that’s why I took it from a King Diamond song. It is a perfect fit for the story I wrote. In this novella Deacon discovers that someone has stolen Charlotte the Were-spider’s unborn children. They have also taken his friend Ronnie. He mounts up with Charlotte and Tiff to rescue Ronnie and the eggsac. It’s a night full of mayhem with a dragon who lives as a hitman, a Yakuza assassin with a demon trapped under his skin, and arms-dealing gangbangers! If you know the Deacon Chalk series, then you know this is going to be a crazy night!

Although your dynamic website addresses this in detail, can you give us a definition of your genre?  What are the elements of ‘dark, urban fantasy’?  And, for those of us familiar only with werewolves, what is a were-spider?

And Were-spiders are awesome! lol. Lycanthropy works a bit differently in the Deaconverse. My thought is this: if lycanthropy really existed then it wouldn’t only be limited to one animal and everybody wouldn’t just be a predator. The Were-spiders came to me in a scene I wrote for book one and Charlotte was born. I didn’t expect her to be quite the hit and central character she has become, but everybody loves her. This story has her featured heavily. She is also in book two which is out in August called BLOOD AND SILVER. You actually get a fairly thorough exploration of lycanthropy in the Deaconverse in book 2.

What drew you to writing occult or paranormal?

I have always been fascinated with it in a fantasy setting. I love monsters and because I spent a lifetime reading horror and fantasy I have a huge mental library of material. It seemed a natural fit. But as much as I love exploring the monster side of things and coming up with new takes on all the old monsters as well as bringing out monsters that never get used anymore (hello cockatrice, I’m looking at you. See you in book 3) the Deacon Chalk series is about the man Deacon Chalk.

Tell us about your series hero Deacon Chalk.  Did he come before the plot of his first appearance or did the plot produce him?  How much of Chalk comes from you or someone you know?  Perhaps our lead characters are not ever completely fictional.

Deacon came with the rough plot of the first book. It was all one big bundle. He pulled a Conan on me. Robert E. Howard used to say that Conan walled fully formed into his mind. That’s what Deacon did. He stepped up and said: “I’m here to kick ass, point me at the monsters.”

The series is his story. It’s a look at what happens to a man when he loses everything in the world that matters to him and he discovers that there is actual evil in the world. What would he do? Deacon is a man with no reason to live. He wants to go be with his family, but because he is Catholic he cannot take himself there, so now he throws himself at monsters hoping that one day one of them is terrible enough to send him on his way.

A noble man with a death wish.

It makes for interesting stories.

I also wrote this series with the view that if this was a real thing, how would it be? Deacon would be damaged, he’d have issues. The people he surrounds himself with would have issues. You don’t sign up to fight monsters because you are well-adjusted. lol.

There is a lot of me in Deacon. He is how I look at the world in big strokes.

How has your “real life,” background or career impacted your work?

There is some of my experiences in there from being a bouncer for several years. Mostly though the influence comes from my family. I love them I built Deacon around the loss of his family, that is what motivates him. I contemplate what I would be like if tomorrow my family was stolen from me in the most brutal way possible. What would I be like? I tell you this, without them, there is no reason in this world for me to hold to one shred of restraint. I would be a sea of rage, and if I knew who it was that took them there would be nothing on this planet that could keep them safe. A man with nothing to live for is the most dangerous man of all.

Can you tell us something about your writing method?  Do you outline?  Just plunge in?  Get through the book once and then rewrite?

Well, now I am a loose outliner. I get an idea, usually a scene, then I write it down, I spend a bit of time researching the things needed for the book (Yakuza assassins, spider eggs, etc) I write the list of things I want to happen in the book and then I plunge in. After that I write straight through, no revision, no rereading, just plow through to the other side.

Then I go back in from beginning to end.

Revision is writing my friends. The rewrite is where the magic happens in my books. First draft is crap. But normally I do a first draft, a rewrite, and then a tiny bit of polish during copyedits. Done and done.

You also write short stories such as your “He Stopped Loving Her Today,” which has seen interest from an independent film maker.  Is the shorter length easier or more of a challenge than the full-length novel?

They both have their challenges and their benefits. But a short story is easy for me because I only write them when they are banging on the front door of my mind, an idea burning that has to be written right then. Those are the short stories. 1,000 to 3,000 words banged out in an evening. Novellas are awesome because you can tell a great story in a quick read because you don’t have time to screw around. You get in, get it done, get out. But you have the freedom of word count to explore something pretty well. Novels are easy for me, they just take time. If you give me a deadline I will make it, if you give me an extension I will take it. I have taken close to 7 months on a novel, writing other stuff at the same time, just because it was available, but I recently learned that with discipline I can turn around a novel in 10 weeks.

Can you tell us what you’re working on now?  Do you envision Deacon having a long run or are you yearning to write another series too?

Deacon Chalk will continue. There are three novels and three novellas contracted, but I have plans for the next seven novels and a ton of shorts. Never fear, the Deaconverse lives on. 🙂

As for my plans now, I just finished the contracted third novel and novella so now I am working on some crime fiction. I have the beginning of a novel and a lot of short fiction. The short fiction will hit first. I am going to be putting it out as HIRED GUN which will be a collection of short crime fiction set in Culvert City, a town full of bad people doing bad things. HIRED GUN will focus mostly on hitmen and the people around them and will not only have my fiction but some of my illustrations in it too. It’s hard-boiled, gut-shot fiction in the mode of SIN CITY. I have a few near finished novellas I will be finishing as I work on the crime novel, one of them is a Cthulhu in space piece that is weird and scary and awesome called THAT WAY LIES MADNESS.  Then back to urban fantasy. I would like to do 2-3 novels a year, one crime, one Deacon Chalk, and one of whatever else I choose.

Whew, I just looked that over and realized I had better get to writing. lol. 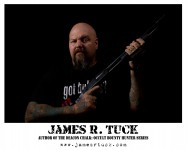 James R. Tuck is the author of the Deacon Chalk series, a professional Tattoo Artist, and a heckuva nice guy. He writes the books that make the nerve under your eye twitch.