Wilf Nussey was a newspaperman for forty years, all but four of them in Africa. He was the foremost foreign correspondent for the large Argus group of newspapers for many years spanning most of Africa’s transition to independence and its continuing upheavals. Before that he was a freelance correspondent in Kenya for British and North American media and lived and worked in Britain and Canada. Assignments have taken him to the Middle East, Far East, Europe and New Zealand.

Wilf has distilled that experience and knowledge into a thriller – DARTS OF DECEIT – that is believable on every page and sucks you into an era where danger in Southern Africa was the norm.  His hero – Victor Kennedy – has withdrawn from the turbulent bush war of Rhodesia and is looking for a new life in England, but he is targeted for a mission back in Africa that looks hard and turns out to be impossible. 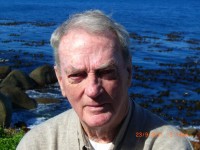 In a time when factions in the Soviet Union battled for control, any scenario was feasible.  DARTS OF DECEIT has a plot that is mind-blowing but also believable.  And he’s populated it with characters as real as the people he interviewed at the time.  Anyone who enjoys a good thriller and with an interest in the turbulent era of the late eighties in Africa will find this book impossible to put down.

I asked Wilf about the book and how he came to write it.

You had a career as a journalist for forty years.  What motivated you to try your hand at fiction?

Well, some of my detractors say I’ve been writing fiction all my life! I’ve always been a voracious reader and good fiction by great writers from Dickens to Larsson has filled so many hours with pleasure and knowledge. I tackled fiction to escape from the necessarily tight rules of factually reporting news and to give my imagination free rein. And, of course, in the hope of supplementing my income.

You’ve written a tense thriller set in a tense time in Southern Africa’s history.  Why did you decide to set the book at the time when the Soviet Union was crumbling and South Africa was clinging hopelessly to Apartheid?

Because it was a most extraordinary period. After decades of the East and West jockeying for power, Africa was suddenly in a fluid state, Southern Africa in particular, at the same time as the collapse of the Soviet Union was changing the face of Europe and international politics generally. Literally anything could have happened in that huge hiatus period and I thought my scenario could well have been one of those things. Apartheid hardly figures in the book, being clearly on its last legs by then, but while South Africa’s military still held together it provided a useful angle which made the story more credible.

Victor is an action hero with lots of history, but he is jaded by killing and dislikes being forced into it.  Did you set out to display that sort of reaction to the bush wars, or did it develop with Victor’s character?

You’re quite right, Victor is jaded by war. I drew his character from the many Rhodesians I met and interviewed over the years who had been forced into fighting – ordinary farmers, white-collar workers, artisans. And also some Zanu freedom fighters I met afterwards. Some had gone straight from school into guerilla warfare and five or ten years later emerged from it knowing nothing else, no living skills apart from using weapons and killing efficiently. It was terribly depressing getting to know these fellows and seeing them try to adapt to normal life. One in particular I got to know very well and his experience so scarred his personality he was scared to open up to anybody. I hope I succeeded in bringing out that aspect of a soldier’s life.

Much of the book is set in Mozambique and one feels the sense of the place and the mood of the time very clearly through your writing.  How much of the book comes from your own experience in Southern Africa reporting over those years?

I guess all of it comes from that really. My first experience of covering Africa outside South Africa was reporting for the East African Standard in Nairobi for a few months and then as an East African stringer for a host of British newspapers in the last couple of years of the Mau Mau conflict in Kenya. I quit Africa for several years then returned to Cape Town from where I covered South West Africa, now Namibia, and continued to do so when I joined the Argus Africa News Service, a small but very special agency. Then I covered virtually the whole of Southern Africa, with my colleagues of course, and came to know Mozambique, Angola, Rhodesia, Zambia, Botswana, Lesotho, Madagascar and Swaziland as intimately, probably more so, than South Africa itself.  I was always on the move and when Portugal’s dictatorship collapsed in 1974 – triggering wholesale upheaval in the region – it was non-stop.

Although the action is all centered in southern Africa, the plot takes place on the world stage.  None of the superpowers come off with great credit.  The message of the book seems to be that local co-operation is the way to go even when governments are in extreme disagreement on principals and ideology.  Would you comment?

One thing reporting on international affairs did for me was generate a deep cynicism about diplomats, politicians and government policymakers in general. Over the years I came to know many national leaders and other politicians, some of them very well. I learned that what would be a blatant lie in a court of law could be skilful diplomacy in the corridors of power. Policies were always selfish, never geared to the interests of others, and they changed with the political winds. When the Southern African stalemate situation came apart the winds were so swift and changeable here that policy today would be history tomorrow. It was a minefield for the unfortunate diplomats who never knew when they woke up in the morning what they would be touting for the day. I think that if there is a message it is that nations of vastly different interests can and have to collaborate when they face a common danger and can find much in common if they try. And that often private individuals can succeed where official angels fear to tread.

Can we look forward to Victor being involved in another adventure – perhaps set in the present day – or what are you planning next?

I don’t know about Victor. Maybe. This book took so long to find a publisher that Vic is getting a bit long in the tooth. I have another book now in the mill, hopefully to be published later this year. This one tackles the South African situation head on – in the period immediately after the 1984 election when the country was on the verge of revolution. I won’t say more now, except that it will probably raise tempers and controversy. After that? I’m trying to get re-published a collection of Lowveld stories which was very well received but very badly published. And then, well, I am fascinated by the history of gold mining in Southern Africa going back to the time of King Solomon. There’s a great yarn there.

DARTS OF DECEIT is available in ebook format from Amazon, Barnes and Noble, and Smashwords.  It will also shortly be available for order in paper format.  More information on books from Rebel ePublishers is available on their website.