So I’m thinking of robbing my next door neighbor’s house.  He’s a cop.

By his own admission he’s a terrible shot.  And he’s a jolly cop, with a little paunch and a beaming sweet-guy smile.  He’s Officer Norman Rockwell who gets cats out of trees.  Not an intimidating fucker with a cop mustache and ashen eyes who you know just loves to beat the shit out of cuffed prisoners with telephone books.  Combined yellow and white pages, not just those little DEX directories.

He reads comic books, like me.  Still subscribes to them even though I can’t afford to anymore.  I’m envious.  I burn with jealousy and greed.  He smiles and talks about series titles I can no longer follow.  The Avengers, X-Men, Daredevil, Batman.  It makes me nostalgic.  It makes me think of a time when my father used to read to me.  It drives me bugshit.  A lot of things do these days.

I’m too fat to be a second-story man.  I’m not shinnying up drainpipes or easing into tiny shower windows.  But his back sliding glass doors, there’s something funky about them.  During a barbecue one time his teen daughter accidentally locked everybody outside and the cop just jiggled the pane in its frame until it jumped the track and opened.

There it is.  Point of entry.

I know how desperate men think.  I’m one of them.

His wife collects silver knick knacks and tea services.  Small lightweight stuff a lazy fat ass like me can carry easily in a sack over my shoulder.  I can pawn them anyplace.  Pawnshops require ID, but I’ve learned they’ll let that kind of thing slide if you just play dumb enough.  I can play very dumb. “My dog ate my wallet.”  Nobody gives you too much static.  Nobody gives you too much money.  The only trick, I suspect, is to wear a hat and keep your face hidden from the cameras in the far corners of the shop.

Since he’s a bad shot, I’m guessing he doesn’t own any guns besides his service pistol.  Guns would be where the real money’s at.  I could sell them on the street to punks of all kinds and really add to the crime rate and downfall of the little town I live in.  Everybody else seems to be.  Last year a guy dressed as Santa Claus robbed two banks in town.  He’s never been caught.  If you’re going to wear a Santa Suit and get away with it, then any asshole can get away with anything.  Seriously, it’s not even original.  Christopher Plummer did it in The Silent Partner.  He got shot in the end.

So why have I chosen the cop next door to rob?

And I don’t really want to invest much energy in my new life as a burglar.  I want to put in minimum effort.  I don’t even want to think about casing homes for weeks on end, figuring out the homeowners’ schedules, peeking in windows.  I don’t want to bother with really rich folks whose homes are wired to independent security forces.

Besides, my neighbor on the other side is a real mountain man-type who owns shotguns and chainsaws.  He’s got wild hair and a bushy white beard without a mustache like those crazy Mennonites you’ve read about, whatever the hell they are.  I wouldn’t screw with him.

I could try the guy across the street.  He and his family live in a cursed house.  Or what had been a cursed house until they actually moved in.  Before them, four or five families tried living there, but nobody seemed to be able to make the mortgage and the bank kept foreclosing.  Now this guy’s in there with his wife and son, and they’ve put up new siding and a new fence and they redid the roof.  I might give it a whirl except he’s got dogs.  Big dogs.

I could make a go of the guy who lives behind me.  He rented out the house for a few years before moving back in.  He had a job somewhere downstate that fell through.  His wife screwed around with real estate.  They once laid out this plan to build their own little empire, buying up houses all over the county and selling for big profit.  Turned out they couldn’t even sell their own place and had to eventually move back in.  His kid once fired a real arrow into my yard, the little bastard.  He fires BB guns all weekend long.  The BBs zing all around and scare my pets.  If I ever invaded his home he might put out my eye.

And anyway, more than anything, I want the comics.  I really want to find out what’s going on with Captain America since the movie came out.  I mean, the guy was dead for a while, and Bucky was pulled out of deep freeze, and then he became Captain America, and now I think Cap is back again, somehow.  Maybe he’s a clone.  Maybe they went back in time and saved him.  I could ask Ed Brubaker, who writes the series.  We’re friends.  But I get the feeling he’d just say, “Why don’t you just pick an issue up?”  And I’m ashamed to say that things are so tight I can’t afford the couple bucks.  Because it wouldn’t just be a couple bucks.  I couldn’t just stop there.  Not when I can lose myself in the stories and the characters that have comforted me since I was four years old.  That remind me of my father.  That remind me of myself.

Why am I even thinking of going down the road of this new occupation?

It’s likely to have more of a future to it than my current career.  I’m a writer.  Writers have no health insurance.  Well, mid-list writers like me.  Last year my wife had a heart attack and the hospital bills left us in tens of thousands of dollars in debt.  My credit debt is deep and black and dying.  Publishers pay on time less and less frequently.  They pay weaker rates more and more.  Maybe it’s their fault.  Maybe it’s yours, maybe it’s mine.

I just read some punk’s Facebook page where he claimed we writers should all be having fun.  He has scads of fun.  If you’re not having fun writing, he claims, you shouldn’t be a writer in the first place.

Words to die by.

I don’t have fun writing.  In the moment it’s a painful, gut-wrenching process, satisfying only afterwards, when the thing is finished.  And sometimes not so much even then.

Officer Baby Face takes a lot of family trips in this big camper parked on the side of his house.  He’s taking off again for the holidays.  Today he asked me to put out his garbage cans while he and his family are traveling.  Of course I said yes.  I’m a good neighbor.  I’m a friend.  I stew, but I don’t hate.  I rage, but that’s only against myself.  I’m embarrassed, but that’s my own pervasive sense of guilt.

He asked me how the writing is going.  I responded, Fine.  I always respond “fine,” to everyone, all the time.  Other writers will understand the lie.

Man, do I want to get my hands on his comic books.

I could just reread all of my own.  I have over five thousand of them neatly backboarded, bagged, and stored away in lengthy cardboard boxes in my office closet.  But I’m going to have to sell them on eBay soon for a song.  Their value has fluctuated wildly over the years.  Right now it’s complete crap.  That’s a real crime.  I should reread them at least one more time before I lose them.

I could stack them up around me while I sit at my desk and work on the new book.  I need my solace, my protection from the vicious world out there and in here, and the anxiety that constantly eats at me.  I turn my envy into bullets and let my protagonist fire away at the cruel, the malicious, the evil.  He is righteous.

I pull my trash cans to the curb.  I pull Officer Friendly’s cans down his driveway and leave them at the curb.  I stand looking at his house, and my other neighbors’ houses, and let the cold wind numb my face.  There are lights on in most of these homes.  There are faces passing the windows.  I wonder, with snow starting to fall, and my ears burning, and my head aching, and my will weak,  how many of them want to rob me. 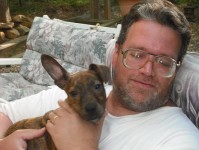 Tom Piccirilli is the author of more than twenty novels including THE LAST KIND WORDS, SHADOW SEASON, THE COLD SPOT, THE COLDEST MILE, and A CHOIR OF ILL CHILDREN. He’s won two International Thriller Awards and four Bram Stoker Awards, as well as having been nominated for the Edgar, the World Fantasy Award, the Macavity, and Le Grand Prix de l’Imaginaire.