Steve Berry is a thriller writer who needs no introduction.  A perennial NEW YORK TIMES bestselling author, his books have garnered rave reviews across the globe and have sold more than ten million copies. His upcoming novel, THE COLUMBUS AFFFAIR, sees a wholly new cast of characters step into the spotlight, but promises an adventure every bit as exciting and action-packed as his Cotton Malone books.  Steve recently sat down with THE BIG THRILL to discuss THE COLUMBUS AFFAIR.

This is your first standalone thriller since launching your highly successful Cotton Malone series six years ago. Why did you choose to make THE COLUMBUS AFFAIR a standalone instead of a part of your established Cotton Malone canon?

One day last summer, Cotton called me on the phone and asked if he could take a year off.  Seems I’ve been blowing up his bookshop, causing him problems with his employees, his insurer won’t cover the building anymore.  Lots of stuff.  So I gave him a vacation to get things back in order.  I haven’t written a stand alone since THE THIRD SECRET in 2005, so it was fun creating a new world, with new characters.  Same type of story — action, history, secrets, conspiracies, international settings — but different motivations. Tom Sagan is an interesting protagonist.

What makes THE COLUMBUS AFFAIR different from your previous novels?

The introduction of Tom Sagan, a disgraced newspaper reporter who is, literally, at the end of his rope.  But I also tried a few new techniques with this book.  Only four points of view and two stages of action.  I also kept the characters much more in contact with one another, making the plot tighter.  This is reminiscent of my first three stand alone thrillers, THE AMBER ROOM, THE ROMANOV PROPHECY, and THE THIRD SECRET.  Then something entirely new for me, this time I referred to the characters, even the antagonist, by their first name, which lowered the psychic distance between the reader and the story.  I like that effect.  But we’ll have to wait and see what the readers think.

What was your initial inspiration for THE COLUMBUS AFFAIR? How did the story’s premise develop through the early days of your writing process?

Years ago, I came across a book, SAILS OF HOPE, by Simon Wiesenthal, published in 1973, which offered a fascinating new take on Christopher Columbus.  I filed the information away and, when I was looking to write this stand alone, the idea became the novel.  I learned about the Jamaican Maroons during some early research and knew they had to be included.  Then a final book, more recent, JEWISH PIRATES OF THE CARIBBEAN, by Ed Kritzler, provided the spark for the last piece of the puzzle.

You are somewhat famous for traveling to many of the key sites in your novels for inspiration and authenticity. What are some of the places you visited in preparation for this novel? Can you share a unique or fascinating experience you had during your travels there?

Elizabeth and I visited Prague and Jamaica.  We had both already been to Vienna.  We spent four amazing days in Prague, roaming its Jewish quarter.  What a city.  You truly feel as if you’re back in the Middle Ages.  Jamaica was equally incredible where we explored the Blue Mountains with a local Maroon colonel.  We were on the island five days and enjoyed a beach only one afternoon for 3 hours.  We saw places in Jamaica that were way off the usual tourist path, all wonderful, and now part of the novel.

Columbus’s true identity has been masked in shadow for centuries. Why do you think there haven’t been more mainstream queries into the contradictions behind the official story of one of the most famous explorers in history? Do you think the full truth of his story will ever be known for certain, or will it be forever destined to a morass of competing legends and contradictory historical accounts?

We’ll never know the truth behind Columbus.  There is simply far too much legend, hype, and outright falsehoods for reality to ever take root.  And Columbus himself seemed to like it that way, as he only added to the confusion during his life.  It’s interesting, this man changed the course of human history, yet we know virtually nothing about him. Which, of course, made great fodder for my story.  The hypothesis presented in the novel, though, is not fantasy.  It’s grounded in enough reality that it might not only be possible, but probable.

How much of yourself do you place in your characters? With which character in THE COLUMBUS AFFAIR do you most identify?

Cotton Malone is pretty much me, in a great many ways.  When I created him it seemed easier just to use myself.  Tom Sagan, in THE COLUMBUS AFFFAIR, is no one in particular. He’s my concoction, made to order for the story.  The character I most enjoyed writing, though, was Bene Rowe, the Jamaican Maroon.  You’re never quite sure if Bene is good or bad.  Sure or confused?  He’s a paradox.  A man caught between two cultures and two times.  He was great fun to manipulate.  I wouldn’t even mind if he returned one day.

What is your favorite book you’ve written thus far (other than THE COLUMBUS AFFAIR)? Why?

A writer should always say that the book just finished is their favorite.  That should be the one where their craft was at its best, since it was their most recent creation.  All writers can hope for is what they wrote today is better than yesterday, and what they write tomorrow is better than today.  It doesn’t get any better than that.

THE SUNNE IN SPLENDOUR, by Sharon Kaye Penman; PILLARS OF THE EARTH, by Ken Follett; anything by James Michener or David Morrell; and THE DAVINCI CODE, by Dan Brown.  These are books that stuck with me, changed my craft, and taught me things I needed to know.

Other than traveling and reading up on your subject matter, what are some of the ways you’ve researched for this or previous novels? Any interesting stories there?

Those are the two main ways every one of my novels have been prepared.  The only addition would be to talk with some expert on a particular subject.  I’ve found that most of them are ready and willing to help.  All we have to do is ask.  For THE COLUMBUS AFFAIR there were several who offered invaluable assistance.  I always thank them in the acknowledgements.

You can be considered one of the giants in thriller writing, with millions of books sold in dozens of countries across the world. When you sit down to start a new project, how do you deal with the pressure that comes with those sorts of expectations from your fans? Do you ever get writer’s block, and if so, how do you overcome it?

When you first start writing the advice is simple.  Write what you love and don’t worry about what might sell — just write.  Once you become a commercial fiction writer, unfortunately, you can’t be oblivious to the world or the times.  I search for something from history, something lost or forgotten, something unique that no one has really dealt with before.  I also stay 2 years out, so I have to make an educated guess as to what readers might find interesting 24 months in the future.  Finding these lost things is becoming tougher and tougher.  Luckily, I’m okay for the next 3 years.  After that?  Who knows? But it’ll come to me.  Writer’s block is simply those times when you get stuck. That happens, for me, several times a day.  It’s no big deal.  Just clean your head out and keep going. For me, that means either tinkering around the house on some project or walking nine holes of golf.  Either one tends to get things going again.

What is one piece of advice you would give to aspiring/new authors who look up to you?

Writing is a discipline, and each writer has to establish a discipline that works for them. Whatever that is, create it, then stick to it, and write every day.  There is only one way to learn how to write.  And we all know what that is.  Write.  Write.  Write.

What can we expect next from Steve Berry and where can we learn more about you?

Cotton Malone returns in May 2013 with a terrific tale involving his son, Gary.  It’s called The Tudor Deception.  To learn more about me, the books, and our foundation, History Matters, go to my website.

Thanks to Steve Berry for taking us behind the scenes on what is sure to be yet another epic, history-laced thriller.If you’re looking for adventure this summer, don’t miss THE COLUMBUS AFFAIR, in stores everywhere May 15th. 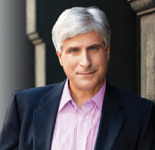 Steve Berry is the New York Times bestselling author of the Cotton Malone series.. He also has three stand-alone thrillers: THE THIRD SECRET, THE ROMANOV PROPHECY and THE AMBER ROOM. He has 14 million books in print, which have been translated into 40 languages and sold in 51 countries. Steve’s road to publishing was long and arduous, spanning 12 years and 85 rejections over 5 separate manuscripts. He’s also an accomplished instructor, having taught writing to audiences across the globe. When Steve’s not writing, you can find him either on a beach, a golf course, or traveling — discovering more things lost — thinking of the next novel. He lives in the historic city of St. Augustine, Florida. Steve and his wife Elizabeth have also started a foundation, History Matters, dedicated to aiding the preservation of our heritage.