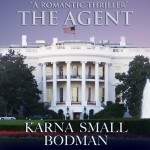 Inspired by the author’s work in The White House as Senior Director of the National Security Council, THE AGENT is the story of the frantic search for a missing diplomat and the clever Washington woman who tries to figure out the puzzle. In the midst of international intrigue, an NSC staffer becomes intrigued with her! Set in a DC neighborhood where the author lived with scenes inside The White House where she worked, it gives the reader an “insider’s” view of “real life” in the nation’s capital!

THE AGENT is available from Amazon.

“5-Stars”: “Good story! Quick read! Karna understands the National Security parts of Washington and the White House like few others.
I am waiting for the next story!” -Fred

“5-Stars”: “If you’re looking for a great read, check this one out by Karna Small Bodman! To say she has some experience around the White House is definitely an understatement! …and it shows in this one! Great book!” -Frank

“5-Stars”: “It was a Fantastic read! I totally enjoyed the book!! Quick, easy. Love Karna’s writing. This is another hit to add to the list!” -Beverly

Karna Small Bodman is a bestselling author (her books have hit “#1 in Thrillers” on Amazon) who began her career as a television news anchor and reporter in San Francisco, Los Angeles and Washington, D.C. She also did political commentary for the ABC Network in New York.

When Ronald Reagan was elected President, he named Karna as his Deputy Press Secretary. Later, she switched to foreign policy issues, and as Senior Director and Spokesman for the National Security Council she was the highest ranking woman on The White House staff. She also did political commentary for the ABC Network in New York.

Now, she is writing novels – “international thrillers” – three are published by Macmillan/Forge. Book #4, CASTLE BRAVO will be released in hardback in May, and she is currently working on #5, AFFAIRS OF STATE. Each involves a contemporary threat to our national security. When shown on The Today Show, they commented, “Instead of calling these books ‘fiction,’ perhaps we should call them ‘faction’.” She also wrote this short story, THE AGENT, which is available on Amazon.

On extensive book tours, Karna has given over 275 speeches to groups and conventions around the country and has been a guest on some 70 radio shows, including Rush Limbaugh, Glenn Beck, and several other syndicated programs.

Her website is: www.karnabodman.com. She is married to Richard S. Bodman. They maintain homes in Naples, FL, Washington, DC and Rancho Santa Fe, CA.

The Axman of New Orleans by Chuck Hustmyre