So there I was, ogling Lady Gaga’s left upper arm and thinking about James Barney.

Yes, that James Barney, the one whose debut novel, The Genesis Key, will be released by Harper on June 28.

And, yes, that Lady Gaga, the one who has already been released.

It was her tattoo that conjured up Barney, the one in German with the following advice for writers:  “’In the deepest hour of the night, confess to yourself that you would die if you were forbidden to write. And look deep into your heart where it spreads its roots, the answer, and ask yourself, must I write?‘”

The quote is from Rilke, although one can imagine his contemporary Freud counseling writers to undertake the same honest, analytical confrontation.

And while James Barney probably hasn’t found it necessary to engrave that admonition on his body, he lives by it nonetheless, albeit expressed in his own, more direct words.

“I write because it’s cheaper than therapy,” Barney explained recently.

Ah, but a therapist would love the elements Barney’s put into his fast-paced thriller:   archaeology, biotechnology, the CIA, the FBI, secret organizations, international crime lords and, most importantly, Genesis 6:1-4 Hint: The Fallen Angels, a portion of the Bible that has spawned many novels, although The Genesis Key hinges on an innovative and intriguing interpretation. The result, Barney says, is “a science thriller with a religious twist.”

The novel’s protagonist is Dr. Kathleen Sainsbury, a 36-year-old ex-NIH scientist, now the struggling founder of a biotech company, who, while investigating the strange deaths of her archaeologist parents on a dig three decades earlier, stumbles across a secret with profound implications for all humankind, which makes her a target of powerful forces determined to possess it.

Barney describes Kathleen as “a busy scientist and businesswoman who, through no fault of her own, finds herself in the middle of a struggle between two powerful, unseen forces that are trying to seize control of her technological achievements for unknown purposes.”

While he isn’t sure where Kathleen came from, Barney venturing that, “she is most likely an amalgam of many people I’ve known, and perhaps a bit of me, too.”

And there are many “bits” of James Barney to choose from. A graduate of the United States Naval Academy, he spent six years as a submarine officer, then headed to Yale Law School and now is a successful Washington, D.C. patent attorney with considerable experience in such areas as medical device and pharmaceuticals.

“I practice high technology law, so one of the things I’m always faced with is how to explain complex scientific concepts to a judge or jury in simple English,” Barney says. “Writing a science-based thriller requires a similar skill, although there is much more to it such as plot, pacing and characters.”

Similarly, Barney holds that “writing novels carries over to the law, especially in the sense of trying cases to a jury.”

“Just like the reader of a crime or suspense novel, a juror expects to hear a story,” he explains. “He or she wants to know who the characters are, what the setting is, and who did what to whom, and why.  Ultimately, the jury decides who the villain is in the story—hopefully, not your client. “ 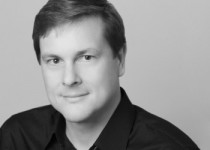 Readers of The Genesis Key will find many blind alleys in the search for villains. But they’ll also find more. “I wanted to explore the intersection of faith and science to show how certain articles of faith are not necessarily in conflict with rational science, if we simply look at things in a different light,” Barney says. “The Genesis Key is not preachy; it treats both science and religion fairly and is not meant to hit the reader over the head with any particular message.  A thriller should, first and foremost, keep you on the edge of your seat without regard to any deeper ‘message’ the author seeks to convey.  On the other hand, there is nothing wrong with a thriller that raises thought-provoking questions.”

Given this, Barney says of The Genesis Key, “mainly, it is just a fun read, but it will make you think.”

It certainly made Barney, who did extensive research during the three years it took him to write the novel, think.” I definitely had to take second look at some of the things in the Bible that are often dismissed as folklore or mythology,” he recalls. “I found myself wondering, ‘what if …’.  That question became the thread that eventually wove the entire plot.”

Not that it was an easy process. “I found as the book progressed that I thought about the plot and the characters all the time, even in the shower—especially in the shower,” Barney confesses.  “Every sticky spot in the story was a puzzle I had to solve or I couldn’t relax.  I think that’s why finishing the novel brought such a sense of relief: all the puzzles were finally solved!”

And the answers, Barney hopes, have made The Genesis Key fit his ideal of a thriller, which is “a book that is so exciting that you actually wish your flight would last 30 minutes longer.”

Even so, as an admitted “plot driven writer,” Barney’s is aware that “the thriller genre allows a writer to ‘get away’ with skimpy characters to some extent because the story pulls the characters along, rather than the characters carrying the story.” So he is “trying to put a bit more emphasis on character development” in which his fascination with “the intersection of science and religion” will “certainly play a role.”

“There definitely needs to be a balance” between plot and character,” Barney says. “Finding that balance is difficult.”

But he already began his search for that balance in The Genesis Key. I definitely had to rewrite a few chapters because, after reading them in the context of the whole story, it dawned on me that certain characters would not act that way in the situations they were in,” he admits. “Well, to be more accurate, it dawned on me after my editor pointed it out to me.  She was really terrific at that sort of thing.”

Barney can also draw on help closer to home. “I am blessed to have two voracious readers in my family: my father and my sister-in-law,” he notes. “They both read three or four books a week, so it’s easy to get quick feedback from them.  My dad can be a tough critic; he doesn’t pull punches when he doesn’t like something in the plot. But that is exactly what you need in the early stages of a novel.”

“I think I learned the same thing from all of them: that the goal of storytelling is to make the reader forget they’re reading a story,” Barney says.

Yet he would rather be stranded on a desert island with his wife rather than any of those illustrious teachers. “My wife is my best trait,” Barney says. “I married well.”

And now that he has written well and joined the ranks of the published, is he ready to become a full-time author? Not quite yet.

“I enjoy my practice and the people I work with,” Barney says. “So, for now, I intend to follow the Scott Turow model and continue practicing law while writing fiction on the side.”

That’s consistent with the person Barney says he really wants to be: Husband, father, lawyer, writer, son of a navy pilot, former submariner, all of which he’s achieved. However, he’s not averse to considering an addition or two, such as a man who has sailed solo around alone. Barney loves sailing and, like his military and legal experiences, it figures into The Genesis Key.

And then there’s brew master.  “Yes, I also like to brew my own beer at home,” he says. “My wife says it makes the house smell like a brewery. I keep telling her, ‘That’s the point!’ If I was a beer, I’d be a home-brewed India Pale Ale fresh out of my own keg.”

To learn more about James Barney, please visit his website.