Any good story will delve into life’s “big questions.” This story actually delves into two. The first of which renowned New York Times Bestselling author John Lescroart answered in a Web video about his 22nd novel, DAMAGE, due out January 4, 2011.

“(My last name) is pronounced less-kwah. Like the opposite of more kwah,” quipped Lescroart, who during the interview for this story, joked that if he had to do it all over again he would have used a nom de plume.

The second big question comes in two parts: What happens when the system lets the wrong man go free? What will it take to undo the damage? That is at the heart of DAMAGE, billed as an explosive look at the seductive power of revenge and the terrible costs of justice.

Lescroart didn’t go to his franchise character, Dismas Hardy, when crafting DAMAGE. Instead, he called up a duo from novels past—Abe Glitsky (cop) and Wes Farrell (DA). “Hardy’s a full-time attorney. When I write about him, it tends to be trial stories,” said Lescroart. “(In the case of DAMAGE), I loved the idea when it popped in my brain. The conflict is that you’ve got a guy who’s out of jail, and a cop and a DA who are trying to get him back in jail. It was a natural for me to have Glitsky and Farrell square off both with and against each other.” 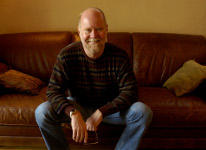 The best example of working with and against each other comes through Lescroart’s favorite scene in DAMAGE. In the scene, Glitsky arrests the antagonist, who has threatened his wife and child in their home. Despite the high profile, Glitsky doesn’t go through the proper channels; he just takes the bad guy down. And Farrell pays for it. “Then Farrell just reams Glitsky, who he’s been defending to the Mayor,” explained Lescroart. “He’s so completely out of control because of how angry he is, and how betrayed he feels about what Glitsky has done. You’ve seen the political face of Farrell—protecting his lawman and being a good DA. And when they get to the parking lot, he just explodes and unloads on Glitsky. It’s the best scene in the book.”

Lescroart added that for him this scene captures one of the great things about writing, especially thrillers, “Everybody’s trying to do the right thing among your good guys, but the right thing is not always the same. This subjective quality about what is right, what they should be concentrating on, and the conflicts between people as they come to different decisions, gives a great richness to the story.”

When it comes to villains, Lescroart uses his own life experience to draw protagonists that are easy to hate, and fun to read about. “I’ve had a couple of bosses who weren’t very good. We’ve all had that life experience, and we hate those people. We hate the abuse they heaped on us, their unfairness, the way they got away with stuff you couldn’t. These are good things to help your reader identify with those characters because they’ve had those experiences. It’s fun to tap into because the emotion is so real.”

At the time of the interview, Lescroart was 50 pages into his next novel, SCAVENGER HUNT, the third in the Wyatt Hunt series. “Hunt gets a mysterious text on his cell phone asking about his mother’s death. Hunt, who was orphaned in 1971, hasn’t thought about his mother in 30 or 40 years. He goes on this hunt to determine how his mother died, and he finds out a lot that he, maybe, doesn’t want to know.”

John Lescroart is the bestselling author of twenty-one previous novels, including Treasure Hunt, A Plague of Secrets, Betrayal, and The Hunt Club. He lives in Northern California. Learn more about him at www.johnlescroart.com