The smoke ring rose, higher and higher, changing shape as it went, until it disappeared into a cloud that moments ago had looked like the caboose of a train, a cloud that now began to change, to mold and meld, to twist and turn and take on the shape of the thing that had entered it. This thing, this dark entity, hung frozen in the sky, calling those chosen few out from their houses, their bars and their factories, calling them forth to face what waited in that dark and foreboding night.

Justin Henry didn’t believe his friend had seen a Ferris wheel rise up from the ground like a runaway vine. But he followed Mickey Reardon out to the overgrown field at the edge of their little country community anyway.

The carnival’s in town, a very different kind of carnival this year.

One no one will be coming home from.

“Thrills and chill’s abound in William Ollie’s Sideshow, a place of magic and mystery you won’t soon forget. An absolute blast to read, the characters well thought out and believable. The action fast paced, the horror visceral. ” — Famous Monsters Of Filmland

“William Ollie’s Sideshow is the most memorable book, and probably the best book, I have read this yea” — Bibliobuffet.com 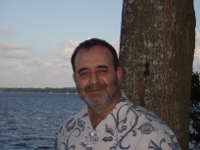 William Ollie lives in Orange Park, Florida. He is the author of The Damned, Sideshow, and the forthcoming Dark Regions Press novel, Lord Of The Mountain. His web presence is maintained at http://www.wmollie.com