Chicago author Libby Hellman, former broadcast journalist and author of award-winning author of two crime fiction series, heats up December with the release of her her new standalone Thriller, Set The Night On Fire.  I recently had a chat with her about the inspiration for her new book, her writing schedule, and how she made her first book sale.

In the past you’ve written two series featuring a main protagonist.  What inspired you to write a standalone thriller?

The glib answer is that I’m “writing my way around the genre.” (I’ve written amateur sleuth, PI, and now a thriller.) But the real answer is two-fold. First is the story itself. I’ve had unresolved feelings and thoughts about the Sixties and how they influenced my life, and I thought that framing a story that’s set—in part — during the time period might help sort it out.

The second part came out of discussions about the most frightening situation a person can imagine. Barring anything that involves children, I think the idea of being stalked by someone you don’t know for a reason you don’t know is at the top of my list.

So, I combined both those “inspirations” into what eventually became SET THE NIGHT ON FIRE.

What  kind of research did you do into the volatile 1960s era that you feature in Set The Night On Fire?

Mostly I lived through it. And remembered. However, I wasn’t in Chicago during the time – I was in Philadelphia and Washington, DC – so I did have to research what went on in Chicago between 1968-1970. That was easier than I thought for two reasons:

— a great deal of information is on the internet

— Chicago turned out to be the center of SDS and Black Panther activities, especially after the ’68 convention so there was a lot going on.

For me, that’s like saying, tell me about your youth. I did it all. Loved much of it, was intimidated by some of it.

Culturally: I lived in a commune, hitchhiked across the country (which I would not recommend) and experimented.

Politically: I came of age politically after the assassination of Bobby Kennedy. That was the turning point for me — I was furious with the country and the system for robbing us of hope.

Btw, my daughter just bought an old-fashioned record player this fall and took most of my albums back to college. Plus ca change…

When you’re writing, what’s your schedule like? Do you set aside a certain time to write every day, or just write when the inspiration strikes? 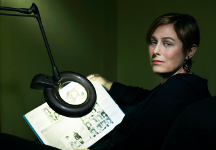 I used to be a lot more disciplined. I wrote in the morning and revised in the afternoon or evening. I still think that’s an ideal schedule, but it rarely happens any more. I’m too distracted with promotion, other writing projects, and life in general. Now I try to write in 45-minute chunks. I actually set a timer and during that time I don’t check email, answer the phone, or go online. I don’t edit, either. I write fresh material. I leave the editing until later. If I can do two 45-minute chunks in a day, it’s a good day.

How has your past as a broadcast journalist helped you to be a better writer?

My background in film and broadcast news helps in two areas. First, I need to “see” a scene as I’m writing it: complete with establishing shots, close-ups, pans, dolly shots, and editing. If I can’t see it, there’s usually something wrong, and I need to conceptualize it differently. It’s also helped with pacing. I know – almost instinctively now –when to begin and when to cut out of a scene. And how to string scenes together for maximum impact.

What are some of your techniques for building suspense in your novels?

I conduct workshops on building suspense – it’s one of the elements of the craft that I love most. To that end, I’d like to direct your readers to a two-part blog I wrote for Writers Unboxed last year. It pretty much covers how I approach suspense and what I think is important. (Libby Fischer Hellmann on Suspense, Part One; Libby Fischer Hellmann on Suspense, Part Two)

Who are some of your favorite thriller writers?

You’re a transplant from Washington, D.C. Do you miss being in on all of the latest political gossip?

Not at all. With the 24-7 cable news cycles these days, I get more than I can handle. At some point I usually have to turn it off.

There’s something else I don’t miss. When I worked in broadcast news, I’d be somewhere– maybe at a party or even the grocery store– and I’d run into someone who was involved in politics. I could always tell they were looking for a way to exploit our relationship so they could get air time. But I was doing the same thing, wondering if they could provide fodder for the next big story. That dual “exploitation” or desire to exploit made me cynical and jaded – and that I don’t miss that at all.

You’re now a die-hard Chicago enthusiast. What is it that you love most about Chicago?

It’s odd… before I moved to Chicago from DC, I’d meet people who were transplants from Chicago, and they all told me I’d love Chicago. I’m still don’t know what they knew or sensed, but they were right. I feel as if I am supposed to live here.

DC, like LA, is basically a one-trick pony. If you’re not involved with politics and/or government (like the film business in LA) you’re out of luck. But Chicago is a “real” city, with real crime, real corruption, and real graft. Seriously, though, I love the density, and I love the diversity. The blue collar society… the marks that every wave of immigrants have left on the city… the food… the politics that are so brazen that all you can do is shake your head and laugh. I even love the Cubs.

It’s also a beautiful city… the lakefront rivals anything in European capitals… and the life style is easy. It’s less expensive.  And less pompous. People are more straightforward and polite. When I first moved to Chicago, I remember being amazed that people actually stood patiently in line for movies. And when you walk into a store, they ask, “Can I help you?”

Have I convinced you?

Tell us about breaking into the publishing world. How did that first sale happen? How long did it take?

It took about five years from the time I started writing seriously until my first book was published. That book, AN EYE FOR MURDER, wasn’t the first I’d written, by the way. It was the fourth. It took that long for me to learn the craft to a point where I was “publishable.”

I’d had somewhat checkered career up to that point. I got an agent with my second manuscript – a police procedural written in third person —  and thought I was pretty hot stuff. The only problem was that he couldn’t sell the manuscript, and after about six months, he advised that I should change my characters, my voice, my plots… and my agent. He didn’t want to represent me anymore. After I picked myself up off the floor, I took his advice, and started writing an amateur sleuth in the first person.  When I finished it, I sent out query letters, got another agent, and she sold it 10 weeks later to Berkley Prime Crime, who then sold the subsidiary hard cover rights to Poisoned Pen. So there was a happy ending.

What’s up next for you?

I’m in the middle of two projects. One is another historical thriller that spans three generations. The other is the third Georgia Davis novel. I’ve never tried writing two books at the same time, and it’s been – er — difficult. If anyone has suggestions, I’m all ears.

Dana Granger
Dana Granger is an award-winning former newspaper reporter who lives in Florida with her family. Her checkered career has also included stints as a waitress, clothing store cashier, secretary, CNA, EMT,andinternet marketer. She is currently working on a paranormal thriller, and writing press releases and SEO web content for clients.

To learn more about Dana, please visit her www.DanaGranger.com.