Recently I sat down with Chris Kuzneski to talk about his latest novel, The Prophecy.

Part of your writer’s journey is quite similar to mine in that I too regaled my classmates at a young age with my stories. I’m curious as to whether you put your aspirations to become a published author aside while toiling away at a “real” job? Or were the stories playing out all along in the private theater of your incredible mind?

Although I’ve been writing for as long as I can remember, it never dawned on me that I could write books for a living until I was in college. And even then, it didn’t seem very realistic. That’s why I majored in journalism instead of creative writing. I knew the odds of getting a job at the local newspaper were a lot better than getting a book deal from a publisher. Unfortunately, it didn’t take long to realize that journalism wasn’t for me. Anytime I interviewed someone, I’d get frustrated when they didn’t give me the perfect quote. I always used to think, if they had only said this, my story would’ve been so much better. Obviously, that’s dangerous ground for a journalist. I figured, if I’m going to put words in people’s mouths, they should probably be fictional characters.

Speaking of which, I am dying to know how the characters (it’s almost a sin to call them characters since these two are so real) of Payne and Jones came to be.

Like most inventions, they were born out of sheer necessity. The plot of my first novel,The Plantation, focused on a unique hostage situation in the Deep South. Due to the racial overtones of the storyline, I wanted to keep things as balanced as possible. Therefore, I created two main characters instead of one. Payne was white, and Jones was black–and they were best friends through thick and thin. In addition to their military backgrounds, they shared a sense of humor, which can be seen in their nonstop banter. To be perfectly honest, I never expected them to be “franchise” characters, but reader reaction was so overwhelmingly positive that I decided to keep them around for Sign of the Cross. By the time I finished that book, I knew I had created something special. My latest thriller, The Prophecy, is the fifth book in the Payne & Jones series. I’ve already written number six, and I’m contracted to write several more. So they’ll be cracking jokes for many years to come.

The Prophecy revolves around an incredibly interesting subject. Can you explain how your story came to fruition?

A few years ago, I read an article about the approach of 2012–which, in some cultures, has been prophesized as the end of the world–and thought it would be an interesting topic for a thriller. Anytime prophecies are mentioned, I instantly think of Nostradamus, so I decided to research his thoughts on the topic. I quickly realized that he has a passionate following around the globe, including millions of people who study his prophecies like gospel. Before long, my story had shifted from the end of the world to Nostradamus himself. I tried to imagine what would happen if a new book of his prophecies was discovered, one that promised to reveal the not-too-distant future. What would one of his believers, particularly a hardcore criminal, be willing to do to obtain it? Then I threw Payne & Jones into the mix, and recorded the explosive results.

Any research tidbits that you found particularly amazing or interesting that inspired you but didn’t show up on the page?

Absolutely not! Amazing facts are like precious gems to a writer. You simply can’t ignore them. In fact, you should do everything you can to make them shine in your story. Trust me, a reader will never say he hated your book because it was too amazing. 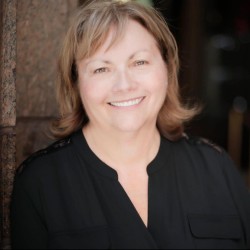 Debra Webb
Debra Webb wrote her first story at age nine and her first romance at thirteen. It wasn't until she spent three years working for the military behind the Iron Curtain and within the confining political Walls of Berlin, Germany, that she realized her true calling. A five-year stint with NASA on the Space Shuttle Program reinforced her love of the endless possibilities within her grasp as a storyteller. A collision course between suspense and romance was set. Debra has been writing romantic suspense and action packed romantic thrillers since.