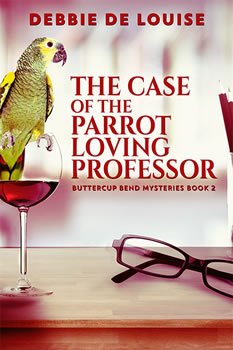 Cathy Carter knew that returning to college would be tough, but she never expected it would involve finding her anthropology professor’s dead body.

There are no shortages of suspects in Dr. Bodkin’s murder. Besides his three ex-wives and estranged son and daughter, there are also the members of the Talking Parrots Club, a group of four parrot enthusiasts, of which he was the president and founder.

As Cathy delves into Bodkin’s murder, she discovers a relationship between her teacher and the Mennonite family from whom she purchased the farmland for her new pet rescue center. She and her friend Nancy, now employed at a detective agency, work together to help Detective Hunt and Sheriff Miller solve the crime.

After receiving cryptic messages, they wonder if someone wants to put a stop to their investigation. With the Buttercup Bend church’s 1970s costume dance and Cathy’s birthday fast approaching, can she and Nancy bring Bodkin’s killer to justice without endangering their lives?

Prolific author Debbie De Louise had a quick chat with The Big Thrill about her latest mystery, THE CASE OF THE PARROT LOVING PROFESSOR: 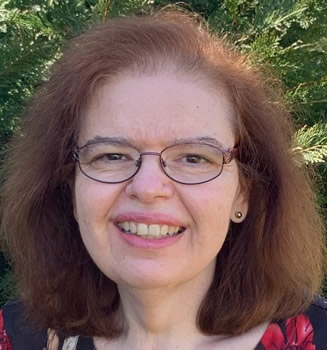 The toughest challenge was writing the second book of a cozy series and developing the characters that were introduced in the first book as well as crafting a new mystery for the main character to solve. The biggest opportunity was furthering the series and creating new scenarios that can be addressed in future books.

Cozy mysteries are fun to write. I enjoy creating quirky characters in a small-town setting. I also like creating mysteries and puzzles for my main character to solve. I appreciate the fact that these books don’t include explicit content involving sex, violence, or language, although they do feature murder and other serious topics but in a less emphasized way.

Since I didn’t know much about parrots and the Mennonite religion, I was surprised at what I learned as I researched these topics. I also enjoyed refreshing my memory about popular icons, music, and culture of the 1970s.

Debbie De Louise is a reference librarian at a public library. She’s the author of 16 novels including the six books of the Cobble Cove cozy mystery series featuring Alicia the librarian and Sneaky, the library cat, and the new Buttercup Bend cozy mysteries featuring Cathy Carter, the owner of a pet cemetery and rescue center. Debbie’s other books include standalone mysteries, a paranormal romance, a time-travel novel, and a collection of cat poems. She also writes articles for Catster.com and has published dozens of short stories and poems in anthologies. She’s a member of the Cat Writers’ Association, Sisters-in-Crime, International Thriller Writers, and the Long Island Authors Group. She lives on Long Island with her husband, daughter, and two cats.

Learn more about her and her books by visiting her website.