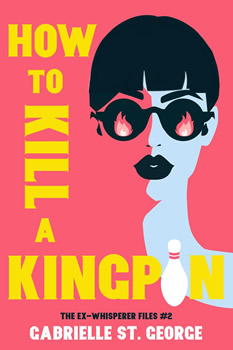 “It’s times like these when a gal’s got her ex-husband hiding inches away from her new boyfriend and a murdered man in rigor on the floor beside her that being good at lying would sure come in handy.”

Gina Malone, aka the Ex-Whisperer, is an expert on exes and bestselling relationship advice author who meddles in people’s affairs for a living. She’s one part Stephanie Plum, one part Dear Sugar, and a newly divorced, empty nester who just turned 50. Our gal has pushed the fresh start button on a whole new life—Could be the world is her oyster, then again, pearls are known to bring bad luck.

It’s a not-so-happy Halloween weekend in Gina’s tiny tourist town on the Canadian shores of Lake Huron. Masses of Millennials, throngs of Gen Xers, and hordes of Boomers are converging for Sunset Beach High’s 150th-anniversary celebrations, plunging the Ex-Whisperer and her gal pals up to their necks in exes.

Some people go to reunions to relive their past, others to exact revenge for it. One former student has a deadly chip on their shoulder, and they blame cool-kid Gina for their years as a loner. So many great reasons to skip your high school reunion, not the least of which–to avoid being murdered.

The Big Thrill recently had the opportunity to talk with author and screenwriter Gabrielle St. George about her latest novel, HOW TO KILL A KINGPIN:

I was afraid to tell the truth because I was drawing on intimate personal experience, and I knew that people from my past would recognize themselves in some of the characters so that I almost choked and backtracked countless times. Also, reliving traumatic events and writing about them was challenging, and even debilitating at times. I really had to force myself to push through. The biggest opportunity for me is that now, years later, I truly can laugh at so much of the trauma and drama that plagued me. Laughter is my medicine, and finding the humor in my past pain helped me write this book, and writing this book helped me heal the pain. 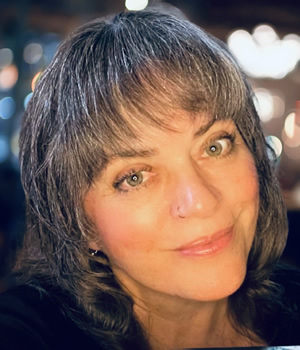 I’m all about the ending, so as soon as I have my premise, I figure out the finale before I do anything else. I come from a screenwriting background, which makes me a serious outliner, but in writing both my novels, I deviated because the characters took over the story, which was pretty magical for me to witness. The ending didn’t change completely, but it definitely morphed. When I was finished writing the book and received my first few rejections, I was surprised that my strongest feeling was one of disappointment, thinking that if the book didn’t sell, I wouldn’t be writing more in the series, and I realized that I would miss spending time with the characters and finding out what their futures held for them.

I’m currently negotiating with a Hollywood production company for the film rights to my series!

The plot, i.e., my life. Sad but true, my own rocky relationships are the inspiration and fodder for this book. I use loads of my own real-life experiences, and I also steal indiscriminately from people close to me. Fair warning, as Anne Lamott said, “If people wanted you to write warmly about them, they should’ve behaved better.” I exact revenge on the villains in my life through the pages in my novels–much cheaper than therapy and equally effective for me.

Does being a screenwriter help you visualize scenes better?

My training ground was screenwriting, but I think I always saw life cinematically anyway (love me some drama). In both novels I’ve written I imagined every scene as if I were watching a movie and then felt like I was just recording what I saw and heard.

What do you enjoy about writing novels that you aren’t able to do in a screenplay?

In a screenplay, you can’t write anything on the page that wouldn’t show up on the screen, and that can be tricky sometimes when you have certain information you need to convey that only one character knows or is thinking about and it’s not the sort of thing they’d go around speaking aloud. In a novel, of course, you can spend pages upon pages inside a character’s head, and I hung out there a lot and enjoyed it immensely. I think that’s why my preference is to write in the first person—I like expressing a character’s thoughts on the page.

Gabrielle St. George is a Canadian screenwriter and story editor with credits on over 100 produced television shows, both in the USA and Canada. Her feature film scripts have been optioned in Hollywood. She is a member of the Writer’s Guild of Canada, Crime Writers of Canada, Sisters in Crime, Mystery Writers of America, and International Thriller Writers.

Ms. St. George writes humorous mysteries and domestic noir about subjects on which she is an expert—mostly failed relationships, hence her debut soft-boiled series, The Ex-Whisperer Files, which launched with How to Murder a Marriage in 2021. Book #2 in the series, HOW TO KILL A KINGPIN, followed in 2022, and Book #3, How to Bury a Billionaire, publishes in 2023.

How to Murder a Marriage was a Killer Nashville Silver Falchion Award Finalist for Best Comedy novel of 2021, won the PatZi Award for Best Novel of 2021 in the USA, from the NPR Radio show, Joy on Paper, and is shortlisted for Best Indie Crime Novel of 2022 by Crime Fiction Lover. She is also the author of the nonfiction GAL GUIDES, which include How to Say So Long to Mr. Wrong, How to Know if He’s Having an Affair, and How to Survive the Love You Hate to Love. Her first short story, “Cold Ethyl,” was published in the Canadian Crime Writers 40th Anniversary Anthology, Cold Canadian Crime, in 2022.

To learn more about Ms. St. George and her work, please visit her website.