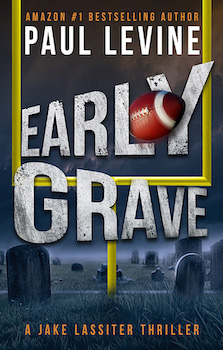 When his godson suffers a catastrophic injury in a high school football game, lawyer Jake Lassiter sues to abolish the sport and becomes the most hated man in Miami. At the same time, the former NFL linebacker battles CTE, the fatal brain disease caused by repetitive head injuries.

Complicating Lassiter’s lawsuit and his health, his personal life hits a rocky patch. He’s in couple’s therapy with fiancée Dr. Melissa Gold and vows to live long enough to fix his relationship and achieve justice for his godson.

“Lassiter is my kind of lawyer.” – Michael Connelly

“Lassiter is the lawyer we all want on our side and on the page.” – Lee Child

Which took shape first: plot, character, or setting?
Character and plot are intertwined for me. Writing a series character has the advantage/disadvantage of a fully formed protagonist. An often cynical lawyer, his personality traits govern how he will handle every situation. “In the practice of law, a sea inhabited by sharks and other carnivores, my ethics are simple. I won’t lie to a judge, steal from a client, or bribe a cop. Other than that, anything goes.” Jake Lassiter is a lawyer who believes the justice system is flawed and that “rough justice is better than none.” This is where character and plot merge. “Justice requires lawyers who are prepared, witnesses who tell the truth, judges who know the law, and jurors who stay awake. Justice is the North Star, the burning bush, the holy virgin. It cannot be bought, sold or mass produced. If you are to spend your life in its pursuit, it is best to believe it exists and hope that you can attain it.” 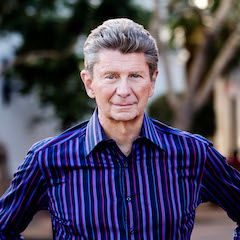 What was the biggest challenge this book presented? What about the biggest opportunity?
EARLY GRAVE is the 15th and final novel in the series that began with the international bestseller To Speak for the Dead in 1990. There is a fine line to be walked in a long-running series. I don’t want to repeat myself, and I want my protagonist to grow and change with the years (as I hopefully have done). However, I don’t want him to lose the core of his identity. Even as he faces life-threatening medical issues (C.T.E.) and relationship problems, he is still the lawyer with a tough bark and gentle heart. It would be boring for the writer and the reader if the character never changed. But it would be jarring if he or she turned into someone new.

No spoilers, but what can you tell us about your book that we won’t find in the jacket copy or the PR material?
The basic issue in the last book of a long-running series is often whether the protagonist will live or die. I didn’t make that decision until the last chapter.

What authors or books have influenced your career as a writer, and why?
John D. MacDonald demonstrated the strength of the first-person protagonist. I also keep in mind his opening sentence of Cinnamon Skin. “There are no one hundred percent heroes.” Carl Hiaasen influenced my ability to mix humor with suspense beginning with Tourist Season, Scott Turow’s Presumed Innocent is quite simply the best courtroom novel I’ve ever read. A complex, layered protagonist and a devilishly clever mystery.

Paul Levine is the Amazon Number One Bestselling Author of the Jake Lassiter and Solomon vs. Lord series. Levine won the John D. MacDonald Fiction Award and has been nominated for the Edgar, Macavity, International Thriller, Shamus, and James Thurber prizes. A former trial lawyer, he also wrote twenty episodes of the CBS military drama JAG and co-created the Supreme Court drama First Monday starring James Garner and Joe Mantegna. The international bestseller To Speak for the Dead was his first novel and introduced readers to linebacker-turned-lawyer Jake Lassiter. Bum Rap, which brought Lassiter together with Steve Solomon and Victoria Lord, was an Amazon #1 bestseller. His latest book is EARLY GRAVE, in which an ailing Lassiter sues to establish high school football as so inherently dangerous as to constitute a “public nuisance” that should be abolished.