A Love Letter to Gen-Xers and Murderinos 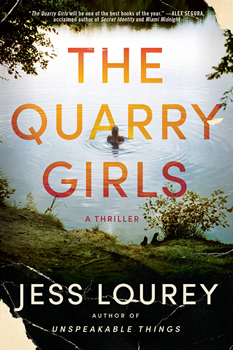 Jess Lourey’s new novel THE QUARRY GIRLS is a love letter to Gen-Xers and Murderinos everywhere. Set in the neighborhood of Pantown in the bucolic university town of St. Cloud, Minnesota in 1977, it follows our hero Heather on her journey into womanhood under the shadow of a serial killer stalking her neighborhood.

First Beth, a waitress at the local diner, goes missing. She was young, smart, athletic, and on her way to a bright future. But when the police treat her disappearance with a disturbing nonchalance, Heather is troubled. There’s something wrong about Sheriff Nillson that Heather can’t quite put her finger on. But her dad is the district attorney, and they have a close bond as Heather fills the gaps left by her mother’s mental health struggles. Surely, he’ll listen to her suspicions.

When he doesn’t, Heather at first believes she might be wrong. Maybe Beth is a runaway. Then she and her friend Brenda see something in the tunnels that run beneath Pantown. Something awful. Something that makes Heather determined to find out what happened to Beth and what’s happening to the girls in Pantown.

The Big Thrill was able to chat with acclaimed author Jess Lourey to discuss the 1970s, the race from girlhood to womanhood, and how truth is sometimes stranger than fiction.

THE QUARRY GIRLS shapes up to be a boys-versus-girls tale highlighting the sentiments and gender roles prominent in 1977. In fact, you talk about the ascent from girlhood to womanhood like being air-dropped onto an open field and having to bolt into the trees to be safe from the boys-becoming-men also being air-dropped. Do you see this as being something from the “golden age” of serial killers, or is this still the reality for young women today?

It was my reality growing up in the ’70s in St. Cloud. Today when I look around and I see the popularity of someone like an Andrew Tate or the incel movement, I think it’s something that’s … going to be an issue. And I think quite honestly, boys as well as girls are the victims of it. It’s awful, the gender roles we’re thrown into. We have to figure out how to fight our way out of them. If you have a very good family that could sort of ground you and show you the way out quicker, then I don’t think it’s so bad. But I think we’re still in it. I think it’s still a reality.

Everything in THE QUARRY GIRLS is so 1977. The music, mood rings, rollerball lip gloss, the fashion, the advent of TV dinners—it was like stepping into a time capsule of my childhood. How much research did you do to make it feel so authentic? 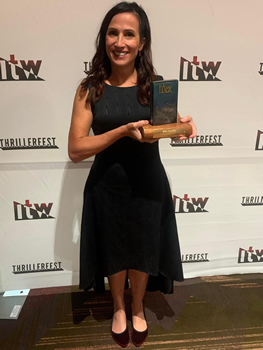 Lourey with her 2022 ITW Best Paperback award for Bloodline

It’s important to me that it’s immersive—that you know the era, the people, and you can follow the story. First, I sent out to my newsletter and said, “Remember the ’70s in the Midwest in St. Cloud? If you do, can you share some details?” I got four single spaced, 10-point font pages worth of [information]. It was just phenomenal detail.

The next thing I did was watch ’70s horror movies. Horror movies for me are the best research because they put their finger on what people are afraid of. The movies are often metaphorical, but right underneath it is that fear of conformity or that fear of being attacked if you’re a woman. So, I watched a bunch of those, and I noted the clothes from it, the cars from it, and the food from it. I did a ton of research before I even started writing, and I loved every minute of it.

The neighborhood of Pantown in St. Cloud, Minnesota, was built by a factory owner for his employees. He included a massive network of tunnels underneath the six-square-block area, with a basement door in each house that takes you directly into this network of unlit tunnels. It’s a world beneath the real world where darkness is normal. What was your inspiration for these tunnels?

Pantown is a real neighborhood and all the [information] about Pan Motor Company [in THE QUARRY GIRLS] is accurate. Samuel Pandolfo was this sort of shyster who came into St. Cloud and built this huge company, this huge factory, and they only turned out a handful of cars right before it was shut down. They moved over to tractors or military equipment for a little while, but he was already in jail by then.

It’s still called Pantown. If you look on the St. Cloud map, the Pantown Brewery is there now. And if you look for it, you can see all the bungalows. They’re all the same design, and other houses have come up around them. I lived in St. Cloud in the ’70s and there was a rumor about the tunnels, and kids always talked about them. But as I started to write this book, nobody would confirm [they existed].

Finally, actually last week—this happened six days ago—one of my close friends talked to her dad about the book. He lived in St. Cloud in the ’70s, and he’s been in the tunnels. So they’re really there! I was so thrilled to find that out. And they really do connect the basements to each other. Not everybody who owns their house knows the doors are there. They’ve been drywalled over, but on the other side, the door is still there. 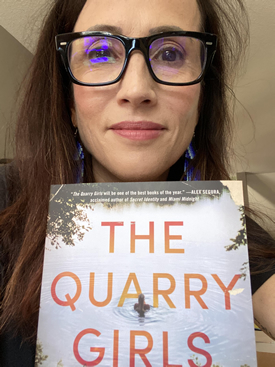 Lourey’s selfie with THE QUARRY GIRLS

That adds a wonderful horror-movie feel. In THE QUARRY GIRLS, there’s a skeleton key that fits all the doors, and you could walk into somebody’s house at any time and see what they were doing. If you were a kid, it was great for pulling a prank or playing TV tag in the dark, but it’s also perfect for much more sinister activities.

Yes. For me, it was such a perfect metaphor, as you mentioned [about the dark world below the real world]. Everybody has these open doors and are smiling, but underneath, right underneath the surface, are the intestines of all of this. So it worked for what I was trying to do. To find out that it was true was icing on the cake.

Heather, your narrator, has a complicated relationship with her mother. Her mother has mental health issues and has caused Heather both physical and mental harm. She loves her mother, but she also feels like she needs to protect her little sister and, to a certain extent, her father from her mother’s volatility. How did this relationship add to the difficulties Heather encountered in the mystery? How would it have been different if her mother had been able to be present?

In the ’70s, mental health was not acknowledged as it should have been. It was treated like something to be ashamed of, something to hide. You were hidden away, which is what happens to Heather’s mother. It leaves her without that strong feminine presence to say, “don’t do this,” “watch out for this,” or “this is what might happen to you.”

Without that strong female presence, I think she takes a lot more risks than she would otherwise. Heather has to figure out a lot more on her own, which raises the heat on the steam kettle she’s living in. She has to figure it out alone. There’s not really an adult she can turn to. 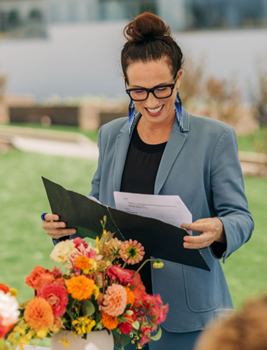 Lourey reading at an August 2022 event in LA.

Heather also has a deep friendship with bandmates Brenda and Maureen. Brenda and Maureen have started their runs to womanhood before Heather, leaving her feeling a little left behind and out of place. How does this complicate her ability to find Beth’s kidnapper?

Like you said, they’ve already started that open-field sprint to the tree line and Heather’s left back. Wanting to join them, but also not wanting to join them. I mean, it’s terrifying when you watch your friends do that, right? You see they get a lot more attention, but they’re a lot less safe. So she’s in this sort of limbo state between child and woman.

And then Beth disappears in the very first chapter, and she sort of writes it off. Heather follows the party line of, “Oh, girls. She probably ran away or something like that.” It makes it difficult for her to take it seriously because she’s so focused on her friends and what the next stage is when you’re 15 going on 25.

You say in your acknowledgements there was no Beth in this book until you watched the television show Mare of Easttown. What was it about that show that inspired you to add such a huge character and storyline?

So first I heard people talking about Mare of Easttown, and I thought it was a TV show about a MAYOR of Easttown and that sounds really boring, so I didn’t watch it. Then I got a first draft of THE QUARRY GIRLS done, and I liked a lot about it. But there was no urgency. I needed somebody to hold it all together.

Then I wrote Beth, and I fell in love with her. She’s just amazing. And—without a spoiler—we don’t know what happens to her [until the very end]. We do know she’s not killed right away, and so she becomes that ticking time clock in the book. 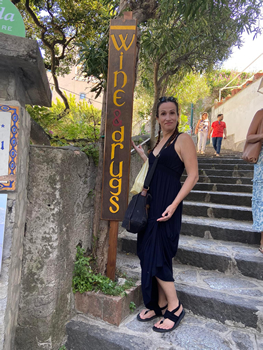 Lourey researching a project in Positano, Italy, in May 2022

I love the fact that her chapters are separate from the main storyline. You have Beth’s chapters labeled as “Beth” and then the main story as Chapter One, Chapter Two, Chapter Three, etc. It’s almost like Beth is her own story, and then you have Heather’s story. It’s two narratives weaving around each other.

That was my genius editor at Thomas & Mercer, Jessica Tribble. Honestly, I would not have the success I have without her. She said, “What if we take Beth out and she’s her own story. She’s isolated. Let’s feel her claustrophobia with the formatting.” And I’m like, “Oh my God, I love that.” It’s such a great idea.

That’s a brilliant idea because the kidnapper has removed her from the narrative. And her struggles to escape are symbolic of how she’s trying to claw her way back into the main narrative.

Exactly. And until the last chapter you don’t know if they’re going to find her alive or not. You don’t know if she gets to join the story or if she’s her own thread that [the murderer] ended.

My next Thomas & Mercer book is a police procedural, but there’s a paranormal/supernatural aspect that’s fascinating. It’s Tana French with some X-Files energy to it.