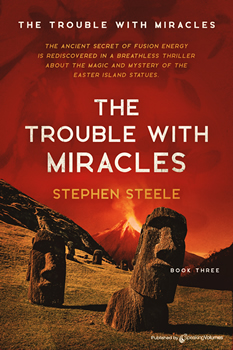 The ancient secret of fusion energy is rediscovered in a breathless thriller about the magic and mystery of the Easter Island statues.

Cyd and Alex return to Montana to settle down and lead a quiet life. Robert, a close friend working in Chile, turns up missing after recent earthquakes trigger strange lights coming from a volcano. Robert’s father persuades Cyd and Alex to go looking for him.

A harrowing adventure follows that uncovers a civilization of ancient aliens who possessed the secret to fusion energy, the same energy that powers the sun. An object is found in a lost city that explains the technology, but it is unreadable.

The Chinese, mining lithium for electric car batteries in Chile’s northern desert, learn that one of their geologists, Robert, has discovered an object that explains how fusion energy works, and how to recreate it here on earth.

Meanwhile, Bahamian treasure hunters Sam Sorini and Nikki Perez recover a journal from a sunken 18th century Spanish galleon that reveals there is something hidden on an island off Chile’s coast that can translate the alien object.

Desperate to get their hands on technology they can use to rule the world, the Chinese pursue Cyd, Alex, Sam and Nikki to Easter Island, where the secrets of the past could save the future—or destroy it.

The Big Thrill caught up with author Stephen Steele to find out more about Book Three in the Trouble with Miracles series: 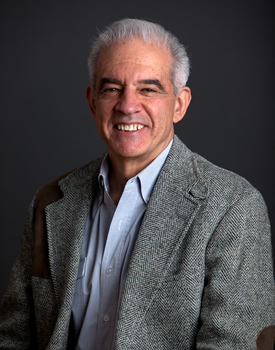 While the series characters continue to grow and develop with each book, they were already well established by the time I started “The Trouble with Miracles.” This last book in the series is a multi-layered story with multiple timelines, so it was important to format as much of it as possible before I started. That said, the storylines took many surprising twists and turns as the book evolved.

I love creating thrilling, believable, real-world adventures with surprising discoveries at every turn. I love developing three-dimensional characters that speak for themselves without me having to put words in their mouths.

Challenges:
1. Integrating the 18th century backstory with the present day.
2. Not overwriting the more fantastical elements of the story.

Opportunity:
Dramatizing one of the most amazing and interesting places on earth that most people know little or nothing about.

When I was in the fifth grade, Superman informed my first stories. In high school, I was Jack Kerouac and Alan Ginsberg living in North Beach in San Francisco. Soon after I became Ernest Hemingway living in Paris and Spain while trying to say the most profound things with the least possible words—and ultimately not saying much of anything at all. In college I lived in an ever-expanding universe of giants like Charles Dickens while accompanying Jack London on his great adventures. For years, I aspired to be as insightful and nonjudgmental of my characters as John Steinbeck. Then the prose of Thomas Wolfe blew me away. I had my DH Lawrence phase, my W. Somerset Maugham phase, my George Eliot (Mary Ann Evans) phase, my James Joyce phase. The existentialists confused me, and the Russians depressed me. Hunter Thompson influenced me in ways I don’t care to mention. In the end I became myself, and for better or worse, that’s who I sound like today.

What exactly is the trouble with miracles?

Stephen Steele writes adventure thrillers and upmarket fiction. He is a graduate of the University of North Texas with degrees in English literature and marketing. An avid sailor, swimmer, and mountain biker, the author worked as a salesman, syndicator of television sports shows, builder and developer, ski instructor and cowboy. He lives in Montana with his ruthless editor Beverly, a fly rod and the streams and rivers of ice and snow.