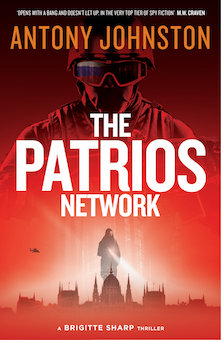 When a renegade British officer steals plans for a high-tech weapon that could plunge whole cities into darkness, elite MI6 hacker Brigitte Sharp is sent to get them back. But her mission goes badly wrong.

Meanwhile, a ‘deepfake’ video of a senior US politician calling for race war in Europe sends a flood of Americans to join neofascist militias on the continent. The Russians nurse a ruthless grudge against a fugitive whistleblower. And in the wings, the Chinese flex their muscles. Everything seems connected… but how?

In her toughest challenge yet, Bridge ventures undercover into the heart of the mysterious Patrios network. Her task? To make sense of the growing chaos before darkness and bloodshed engulf Europe. If a powerful enemy doesn’t get her first…

“THE PATRIOS NETWORK opens with a bang and doesn’t let up. It’s contemporary, lightning-paced and in the very top tier of spy fiction. Highly recommended.”
– MW Craven

Which took shape first: plot, character, or setting?
This is the third Brigitte Sharp book, with a well-established cast of characters, so plot was definitely the first thing on my mind when I sat down to write. All of the Bridge novels deal with technological threats to society, but for this one I also wanted to reflect some troubling real-world events as well. The intersection of online communities with the rise of neofascism opened up a lot of opportunities. 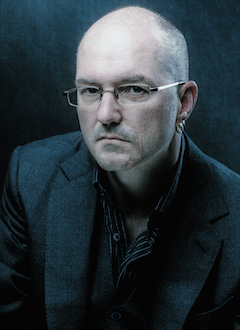 What attracts you to this book’s genre?
Espionage thrillers allow me to shine a light on real world issues of society and the geopolitics of government while also entertaining readers, which is a double win. The Brigitte books in particular allow me to go even further, looking at how technology shapes our lives and some of the ways in which it can be misused and exploited… in a book filled with firefights, fistfights, and a race to save the world. What could be better?!

What was the biggest challenge this book presented? What about the biggest opportunity?
The biggest challenge was a personal one, because to get the neofascists right, I had to do a lot of research into that side of the online world, and… it wasn’t pretty. Even when the research was done, it made writing the book itself hard because I had to get inside the minds of people with fairly repellent and hateful views.

But the opportunity is the flipside of that same challenge, because it afforded me the chance to expose that kind of thinking for what it is without making it a polemic. And if you think what I write in the book is horrible, believe me, it’s nothing compared to what’s really out there.

No spoilers, but what can you tell us about your book that we won’t find in the jacket copy or the PR material?
I think the biggest thing that surprises many people about the Brigitte books is that I don’t make up the advanced technology out of thin air. Almost everything in them, including in THE PATRIOS NETWORK, is real tech that real people are using right now, in our world. It’s pretty scary.

*****
Antony Johnston is a New York Times bestselling writer and creator of Atomic Blonde, the spy thriller graphic novel that became a blockbuster Charlize Theron movie. One of the first generation of authors to build his career online, Antony now combines his knowledge of how technology shapes our lives with his expertise in spy thrillers, breathing vivid life into troubled MI6 hacker Brigitte Sharp in a series of cyber-espionage plots reflecting real world fears and conspiracies.