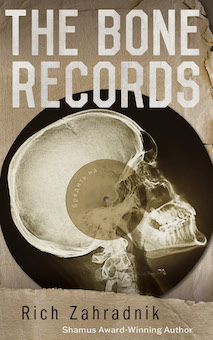 NY Police Academy washout Grigg Orlov discovers an eerie piece of evidence at the scene of his father’s brutal murder: a disc-shaped X-ray of a skull. It’s a bone record—what Soviet citizens called banned American songs recorded on used X-rays. But the black-market singles haven’t been produced since the sixties. What’s one doing in Coney Island in 2016? Grigg uncovers a connection between his father and three others who collected bone records when they were teenage friends growing up in Leningrad. Are past and present linked? Or is the murder tied to the local mob? Grigg’s got too many suspects and too little time. He must get to the truth before a remorseless killer takes everything he has.

“THE BONE RECORDS grabs you by the throat on the very first page, then never slows down as it takes you on a wild ride through New York City streets filled with Russian intrigue, underworld crime, police corruption, and a man’s desperate quest to avenge his father’s murder. Shamus Award-winner Rich Zahradnik has written a taut, terrifically exciting, and thought-provoking thriller.” —R.G. Belsky, award-winning author of the Clare Carlson mystery series

“The plot is not only timely, but utterly unique—a tale of cultures colliding, often with sudden and unexpected consequences, as lonely city claims-adjuster Grigg Orlov spends his long nights chasing down leads on the mysterious disappearance of his father… This is a compelling read, highly recommended.” —LA Times bestselling author Baron R. Birtcher

Which took shape first: plot, character, or setting?
Since I began with the idea of the bone records being central to the mystery of the murder, I guess I’d have to say plot. I’m a pantser, so I built a contemporary story from these relics of the Soviet black market. Shaping the lead, Grigg Orlov, came next. 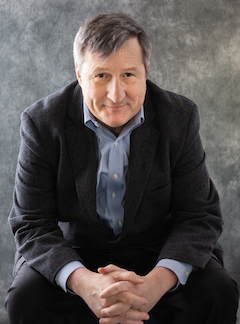 What attracts you to this book’s genre?
I’d been modestly successful with my first mystery series—the Coleridge Taylor mysteries—winning several awards. By the fourth book in the series, I really felt I had a handle on the structure and approach to writing a page turner—I hope—of a mystery. THE BONE RECORDS became my doorway into my next story in the genre.

No spoilers, but what can you tell us about your book that we won’t find in the jacket copy or the PR material?
The story begins in mid-August 2016 and ends the day before Election Day that year. This lets me put the craziness of that election campaign in as little background tidbits. One subplot involves a warehouse where Russian immigrants are posting propaganda to social media in an operation connected to the Russian spy service. In real life, the US security services said the Russians published thousands of messages on Facebook, Twitter and Instagram to confuse voters before that election. I invented the idea that some of it was being done in a Brooklyn warehouse Grigg dubs the Facebook Factory.

What authors or books have influenced your career as a writer, and why?
Michael Connelly, always. His voice seems matter-of-fact, like he’s writing the journalism of his previous career. But it’s really not. His stories sneak up on you. They have this amazing way of grabbing you and not letting go. And he’s created some of the greatest protagonists in modern thrillers.

Rich Zahradnik is the author of the thriller THE BONE RECORDS and four critically acclaimed mysteries, including Lights Out Summer, winner of the Shamus Award. He was a journalist for twenty-seven years and now lives in Pelham, New York, where he is the mentor to the staff of the Pelham Examiner, an award-winning community newspaper run, edited, reported, and written by people under the age of eighteen.