AudioFile Magazine was excited to host a live conversation with four narrators of British mystery audiobooks. Watch Antonia Beamish, John Hopkins, Jennifer Kirby, and Aoife McMahon perform live readings from new and favorite mystery audiobooks—including titles that inspired the popular crime drama television series Midsomer Murders and Whitstable Pearl—and answer audience questions about their work. Learn about how they got their start narrating audiobooks, their favorite characters to perform, and more in this fascinating discussion.

John Hopkins narrates a selection from the first book in Caroline Graham’s popular Midsomer Murders series, THE KILLINGS AT BADGER’S DRIFT. John tells us about acting in the television series and how it influenced his portrayals in the newly recorded audiobook series. First published in 1987, it’s a complicated murder mystery with multidimensional characters and murders galore. Hopkins draws listeners into the tiny hamlet of Badger’s Drift, where DCI Barnaby and DS Troy investigate an elderly woman’s murder. Listeners can hear John narrate the subsequent books in the series as well.

Aoife McMahon reads from HIGH PRESSURE, Sam Blake’s mystery set in London and featuring an anti-terrorism expert and a girl desperately searching for her sister after an explosion. McMahon tells us about how she handles reading tense audiobooks like this one and her approach to accents and characterizations.

Narrator Jennifer Kirby narrates a selection from Julie Wassmer’s MURDER AT MOUNT EPHRAIM, her ninth book in the Whitstable Pearl series, also a popular television series. She gets to play with a whole household of vicious wedding guests in a Christie-esque mystery set in an English country house. Listeners hear her skill as she voices Pearl Nolan, a restaurant owner who sets up a small-time detective agency. Pearl hopes for a break at the wedding of friends but unfortunately has to put her detective skills to use when faced with a gruesome murder.

Antonia Beamish reads from the beginning of THE DEADLY HOUSES, book six in Charlie Gallagher’s Detective Maddie Ives series. It’s an intense thriller that revolves around convicted domestic abusers, motivated by revenge and rage, who terrorize those they think are responsible for breaking up their families and homes. Beamish’s Earphones Award-winning narration is described as a tour de force by our reviewer, who warns that the audiobook will ignite a thrilling full-body experience.

As the nights get longer and the days grow colder, AudioFile’s editors are settling in with excellent mysteries. We’re featuring new audiobooks from favorite authors, including the latest Earphones Award winner from Richard Osman, Deanna Rayborn’s delightful non-stop rollercoaster ride about assassins of a certain age, and a charming collection of short stories inspired by the intrepid Miss Marple. Read on to find your next fireside listening companion. 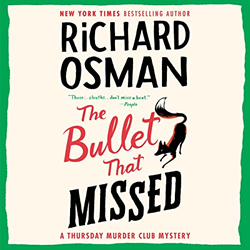 The great Fiona Shaw’s performance of this third outing for the Thursday Murder Club is a multilayered joy. New to the series? Start here; start anywhere. You’ll catch right up. Shaw’s technique is impeccable as she delivers the deliciously funny dialogue of Osman’s elderly characters. Just for instance, late in the plot, sweet, fluttery little Joyce finds a 6’7” Swedish thug in her house aiming a gun at her and promising to shoot. Shaw’s disarming performance of her unflappable reaction will make you laugh out loud. The whole production is a comic marvel. 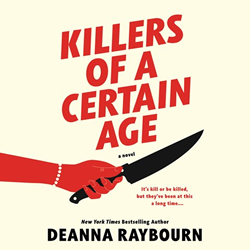 KILLERS OF A CERTAIN AGE

Completely enjoyable performances by Jane Oppenheimer and Christina Delaine add sparkle to this delightful audiobook. For 40 years, Billie, MaryAlice, Helen, and Natalie have worked as assassins for an ultra-secret organization. Now in their 60s, the women are enjoying a luxury retirement cruise when they become entangled in an assassination attempt—on them. Oppenheimer and Delaine skillfully develop the story’s two timelines, recounting exploits throughout the women’s careers and capturing the nonstop roller-coaster ride as they try to identify who’s out to kill them. 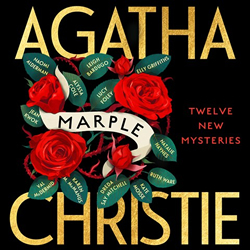 Agatha Christie’s Miss Marple is reimagined in clever mini mysteries from 12 authors with a different narrator for each. The cast is an impressive group of narrators, and each is superb. People underestimate Miss Marple—to their detriment; the elderly woman often seen knitting solves murders faster than seasoned detectives. The new collection takes her from St. Mary Mead to Manhattan, the Italian Riviera, and other locales. 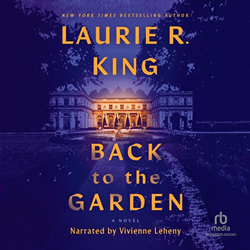 BACK TO THE GARDEN

Vivienne Leheny’s steady delivery and warm tone welcome listeners into Laurie R. King’s latest novel, a contemporary mystery set in California. It features an intriguing female detective in Raquel Laing, a police department cold case investigator. While working to identify victims of a 1970s serial killer, Laing studies a corpse found on the grounds of the Gardener Estate Museum. Leheny skillfully performs a host of characters by creating audio sketches of walk-on folks and personality-rich voices for the core people. When the action explodes, Leheny delivers a satisfying burst of frenzy. 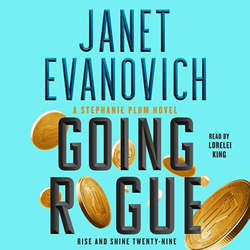 Fans who look forward to the release of the latest Stephanie Plum audiobook, especially as narrated by Lorelei King, will not be disappointed. King keeps listeners enjoying the ride-along with Stephanie Plum, bounty hunter. Stephanie finds herself involved in a desperate effort to rescue her kidnapped colleague, Connie. King consistently gives new life to these characters, particularly Stephanie’s sidekick, Lula. So what if Stephanie hasn’t matured in 29 books and continues to question her job, her relationship commitments, and her life? As long as King is narrating, fans will keep coming back for more.