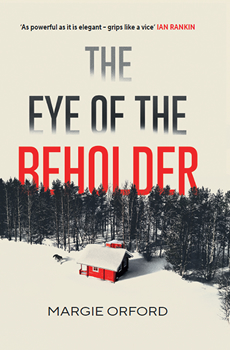 Margie Orford is an internationally acclaimed writer and journalist. She was born in London to South African parents but grew up in Namibia and South Africa. She now lives in London. Her Clare Hart novels are literary crime fiction that explore violence and its effects in South Africa. The Weekender describes her as the “queen of South African crime-thriller writers.” Apart from her fiction, she writes about crime, gender violence, politics and freedom of expression, and literature.

Her new book THE EYE OF THE BEHOLDER is a stunner.

The novel revolves around the lives of three women—Cora, a successful artist who grew up on a farm in South Africa and now lives in Scotland; Freya, her daughter who lives in London and is in a relationship to which she’s not really committed but doesn’t actively wish to end; and Angel who lives at a wolf sanctuary in Canada.

The story starts with Cora, terrified, escaping from an isolated skiing cabin in Canada as a winter storm breaks. She only relaxes when she manages to board a plane to London. Cora uses her art to work out her emotional crises, and she starts a huge, new work as soon as she is home in Scotland. Meanwhile, Angel tries to discover what has happened to Yves Fourier, the owner of the cabin which is located near the wolf sanctuary.

In this interview with The Big Thrill, Orford talks more about THE EYE OF THE BEHOLDER. 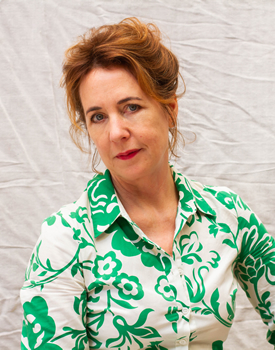 Cora has been abused during her childhood and tries to work through that with her painting. What made you choose art as her means of expression?

I am a word person, so I am drawn to characters who have a different language for violence or joy. I am interested in experiences that are outside of or beyond language, as many experiences of the body are. These can be reached in different ways via the visual arts—or by dance and sound.

How important is Cora’s South African background to her character?

That Cora is from South Africa is crucial—or it was for me. For two reasons. One, hers is a childhood and a milieu that I know because this is where I was made into the woman I am today. The second reason is that I was curious about the shaping of the psyche that happens when someone grows up in a fundamentally violent country, as apartheid South Africa was. I guess I also find it very difficult to imagine an English or Scottish childhood—I could describe it from the outside, but I have no idea of the tectonics of it.

Cora’s latest exhibition, Forbidden Fruit, includes miniatures of a girl reaching puberty. She says these are of herself at that age, but she’s been accused of using Freya as an underage model, which she strenuously denies. Nevertheless, the controversy has opened a gap between mother and daughter, and Freya seems lost and confused. Would it be right to say that Freya is to some extent “collateral damage” of her mother’s past?

I explore the notion of inherited trauma—Cora has split off what happened to her and what she has done. The hurt goes on, though, and Freya is acutely aware—all her life—of her mother’s absences both physical and emotional. We live in and around each other’s damage—especially in the intimate cauldron that goes by the name of family. And so yes, Freya is shaped by her mother’s experience. I was curious about Cora’s solipsistic streak, which is a result of trauma, I think. Those unresolved memories have a grip on us—they hold our attention. Attention that a daughter would legitimately desire.

Wolves at the Yamnuska wolfdog sanctuary.

By contrast, Angel has a mission. She is studying Yves Fournier, who has an isolated cabin near the wolf sanctuary that he uses as a base for cross-country skiing.

As a child, Angel was abused by her stepfather, who forced her to perform sexual acts for Internet voyeurs, and she believes Fournier is one of them. Eventually, she manages to free herself of the detestable stepfather but can never free herself of what was done to her. Is she motivated by revenge or is it something else?

Angel is pure rage. Where Cora turns her anger inwards—one of the sources of her art, I would say, Angel turns it all outwards. Her ambition is to kill everyone who has ever harmed her—by looking at her. She is, I suppose, a kind of Medusa figure in that she will return the male gaze and turn anyone who looks at her (on the Internet) to stone. I was curious about the figure of Lolita in Nabokov’s book. What, I wondered, would Lolita have been like if she had not been used and discarded to die an early death? What if that male fantasy of disposable women turns on them? And hunts them down. And kills them.

Cora is seduced—groomed, one could say. Yves would like to be able to love a woman like Cora, but he does not. He cannot, so he punishes her. This is why her background—the violent patriarchal family she came from, the violence of the farm she grew up on—is important. When she first steps into his arms, she feels as if she has come home. Home, for many women, is a dangerous place. She does not question what her home was—her dominant father, her silent defeated mother.

Yves is also an example of how most men get away with sexual assaults scot free or, in his case, with a slap on the wrist.

Kilcreggan where Cora—the protagonist in EYE OF THE BEHOLDER—has her studio.

Fournier is also the link between the three women and drives the mystery when he vanishes during a winter storm. Cora is running from him. Angel has plans for him. Freya ends up in danger because of him. How did you go about constructing the full story?

I made it up in retrospect. I wondered—with Cora at the centre—what it would be like to love a man who has been found guilty of what has come to be considered the most heinous crime—the abuse of children. Cora finds out (too late) but it is so difficult to get a message from the head to the heart. Hearts are stupid things—they go on loving. That’s the question that is always asked. Why did she stay? Why did she go back? Why did she stay so long? This book is one answer.

A typical blizzard in Canada, where the story takes place.

Hopefully you are thinking about another novel. Are you considering bringing back Claire Hart, perhaps in a new context? Then again, Angel has a lot of work ahead of her. Might there be a sequel to THE EYE OF THE BEHOLDER? Or are you planning something completely different?

I have two new Angel books in mind. She does have a lot to do—a lot to put right. I had a thought that she might come across Clare Hart in London—maybe she jumped ship like I did. There is meant to be a memoir coming too. So let’s see what arrives first.