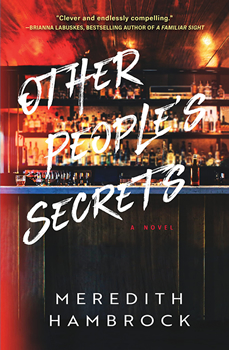 In Meredith Hambrock’s clever debut, OTHER PEOPLE’S SECRETS, Baby has climbed out of the dumpster—literally—to become the unlikely hero of a small lakeside town when outside forces threaten the only home she’s ever known.

Baby lives and works at Oakwood Hills with her friends and on-again, off-again boyfriend—a place where she’s fully accepted, despite her…flaws. She’s drinking too much following the death of her adoptive mother, and a local drug kingpin known as Bad Mike is back in town to add to the chaos. As if that wasn’t bad enough, the owner of Oakwood Hills is selling the resort to someone who plans to gut it.

Baby doesn’t intend to lose her home without a fight. She enlists the help of her friends to try and recover a sunken treasure rumored to be sitting at the bottom of the lake—but they’re not the only ones after it. Which of course is when things get criminal.

Hambrock infuses wit and mystery to the compelling story of a messy protagonist whose heart is in the right place, even if things don’t quite go as she planned. In this exclusive interview with The Big Thrill, Hambrock shares more about the inspiration for Dumpster Baby, and how she’s navigating her debut year.

Before we dive into talking about the book, congratulations on it being your debut! I’d love to hear more about your path to publication.

Thank you so much! Oh my god, this road has been long. I started writing seriously with the goal of publishing 17 years ago. I wrote three novels before this one that will never see the light of day. One of those books, at least, scored me the best agent on the planet (Abby Saul at The Lark Group).

This book was tricky, on submission, because it’s not the crime-iest book in the world. My editor at Crooked Lane Books, Sara J. Henry, considered it for a year, I think, trying to figure it out. I’m so lucky she fell in love with my hero, Dumpster Baby, and helped to bring it into the world. Baby has a way of worming her way into the hearts and minds of anyone who loves an underdog, and I’m so happy to have found such a compelling champion for my work.

We’re introduced to your unorthodox protagonist—known to most as Dumpster Baby because she was born in a dumpster. You’ve given her such a great backstory. What was the inspiration for this character? 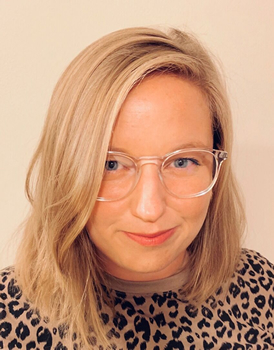 My heart has a way of leading me toward the truth when I write something, and after I wrote this book, I realized I was really trying to sort out some issues I had with self-worth. I had just turned 30 and I was working a bunch of different service jobs while working as a screenwriter and trying to write fiction and always coming up short in other areas of my life because I had to sacrifice time with family and friends to be able to pursue this dream. So this struggle for self-worth became a bit of myself I imbued into Baby.

That and I really want to create a character who has what I like to call “scamp energy,” and there are a lot of family members, my mother included, who have it. I was raised by and around really funny people, but especially funny women. There’s a scene in this book where Dumpster Baby does the worm, which is totally inspired by my cousin, who did the worm with her husband at her wedding. It was so hilarious and beautiful, I cried, then wrote a scene inspired by it.

But yes, scamp energy… it’s this quality where you try to get away with things you have no business getting away with. You’re not afraid to break the rules a little, to try to bend the world to your will, because life is so fucking exhausting sometimes. You’ve got to have fun, to flail against the dying of the light, so to speak. And it’s just a quality I like in a person. Baby is the ultimate scamp.

I love that she’s messy. What is the role of “messy” protagonists—particularly females—in crime fiction?

I think at first I want to acknowledge that there is a lot of privilege wrapped up in getting to be messy in the first place, especially white privilege. I feel lucky to be able to publish a book with a female anti-hero, someone who makes a lot of mistakes but is still finding readers who love her. I know that is not the norm, and I am lucky to have the freedom to write someone this chaotic and sometimes terrible.

I also think crime fiction—I come from the TV world, and I see this in both mediums—often likes its women to have some kind of domestic situation tied to their criminal acts. It’s just an easier emotional buy-in, I guess, because it’s perhaps more relatable to readers and the dramatic stakes (ex. she’s selling drugs to provide for her children) are easier understood. But I’m not a mother, I’m not a wife, and don’t intend to be. No shame in that, it’s just not what I want.

Because of that, it’s exciting, for me, to write about the emotional character arcs of women outside of who they are to other people.

Women experience change that has to do with their relationship with themselves all the time. I’m always going to write those female characters because that is what is interesting to me. I am very confident there is an audience who craves this kind of work.

OTHER PEOPLE’S SECRETS takes place in a small lakeside town, and you’ve created such an atmospheric setting. How did you go about crafting this locale?

My book is very much inspired by Ontario’s cottage country, where there are a lot of mega-mansions and wealthy enclaves.

It’s also partly inspired by this bar in Penticton, BC called The Barking Parrot, which isn’t as divey or unfriendly as the bar in my book, but it does have a certain charm. For example, this year they did an event on Valentine’s Day where couples could come and get married. Unlimited couples for one hour, and they tried to lure spectators with a $4.95 buffet. I almost hopped in my car and went, but it’s a five-hour drive in the winter, and I don’t have snow tires. Maybe next year!

I would definitely call it “loosely inspired,” though, because I wanted my book to have an almost demented fairy tale quality.

There are a number of fascinating and well-fleshed-out characters that populate the story—and the resort where Baby works. Who was your favorite? Most difficult?

I love Baby. She is a fully formed person in my head. I love her so deeply, it’s hard for me to see her flaws as flaws. It’s bad. I think it was hard for me to write her f-boy boyfriend, Peter, to have compassion for him. But I hope I did! My editor really helped me there. She really tricked me into being nicer to a hot, rich man. What a wizard!

OTHER PEOPLE’S SECRETS is first a great read—but you also tackle some important societal issues such as alcoholism, wealth gap and corruption, and drugs. Why was it important for you to take the story in this direction? What do you hope readers take away from your book, aside from a satisfying read?

I’m someone who really struggles with writing about death, violence, and other horrible things. I know the world is full of this stuff, but I feel weird pursuing ego-driven creative projects that take advantage of it, in a way. I just don’t feel good about it. I do read and enjoy books written by other people that deal with this. But I guess if I’m going to do it, there has to be a point, or a reason for it.

I just think if you are going to write about violence and crime, especially in the context of poverty, it’s important to center the human being first, to see the complexity of someone who is forced to make really awful choices. And I tried to do that here, but I know there are moments I failed. Still, that’s an ideal I am hoping to continue to bring to my writing.

While this is your debut novel, it’s not your first foray into writing. How does your work as a screenwriter influence or help your work as a novelist, and vice versa?

Writing for television is incredibly fun, because you get to be in writing rooms a lot of the time, where you get to hang out with other writers and work on building stories together. You also just learn a ton. Every second I’ve spent in a writing room has taught me so much. It also just teaches you to write as a job, so to be professional with your communication, with deadlines. Writer’s block is not a thing when money is involved and you need to pay rent, so it’s taught me how to cope with stress and just kind of knuckle down when needed. That part is so helpful.

Debut year can be pretty intense—and now, on the other side of a pandemic that kept everyone “locked down,” the opportunities for in-person events is back. What lessons have you learned from your debut experience that you could pass on to aspiring authors?

I have spent many a night on the floor, hugging a pillow, listening to music, and taking deep breaths. The stress is so overwhelming. The things that have helped me the most are making friends with book people. And I truly love it. I am meeting so many incredible writers, booksellers, editors, etc. I have never liked networking so much. I cannot believe I’m saying that. I went to Bouchercon, and I am so enamoured with this community. It’s so wonderful.

Make friends! Don’t just push your book! Sleep! Water! Protein bars. Read books and pump up the work of other people. Tweet and post about what you like. Have fun. Apologize to your friends and family ahead of time. Ask for and accept help.

Oh my god. It’s so fun and so terrible. My stomach always hurts. I am truly having a great time.

I’m trying to write a mystery novel set on a sailing yacht. It’s a difficult world to research, but I’m having fun with it.