Democracy Can Be Messy 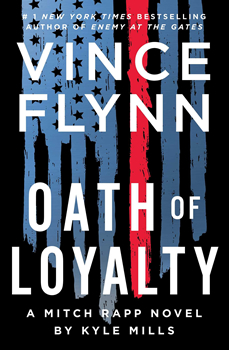 In the tradition of the old Westerns, this town—read the USA—is too small for the both of them. In OATH OF LOYALTY, Mitch Rapp makes a deal with President Anthony Cook to stay out of the United States for the duration of his presidency. Irene Kennedy is initially satisfied with the truce she brokered, even if it meant leaving the CIA’s Director’s Chair. The new director, however, reneges on the deal and operates behind the scenes to have enemies, old and new, go after Claudia Gould, Rapp’s wife. Now Mitch is busy racing against the multiple threats coming their way.

OATH OF LOYALTY is a direct sequel to last year’s book Enemy at the Gates. Author Kyle Mills has written the fan-favorite series in a straight timeline, but this one takes it to another level.

“The prologue is actually a retelling of one of the last chapters of the previous book, but from a different character’s point of view,” Mills says. “Enemy at the Gates and OATH OF LOYALTY are one book split in two. It wasn’t my intention to do that, but I got a little ahead of history and had to rework my concept at the last minute. I started with the idea of writing a trilogy about the fall of the US democracy, but then came January 6 and all the talk about stolen elections. This book is me escaping the corner I’d painted myself into and effectively closes the Cook arc.”

That exit strategy came with its own difficulties. 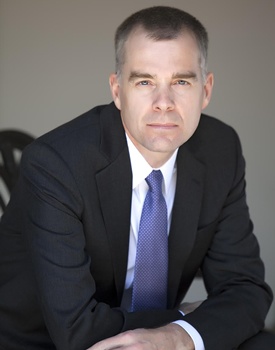 “I wanted to shut down that arc but also to write a really compelling Mitch Rapp novel,” he says. “The two aren’t mutually exclusive, of course, but working in the backstory while keeping the pace high can be a challenge.”

In the greater scheme of things, Anthony Cook versus Mitch Rapp feels like David versus Goliath, although there might be some controversy labeling who’s who.

“It’s definitely that kind of a matchup, and I saw Mitch as David,” Mills says. “He’s not so naïve as to miss the fact that many of his allies are going to side with the president, and it’s a battle he doesn’t want to fight. He’s a true patriot, and Anthony Cook, for better or for worse, is America’s duly elected leader. Democracy can be messy, but it has to be respected.”

One of the new enemies that enters the stage in OATH OF LOYALTY is the mysterious Legion, an assassin, or group of them, with an unbeatable track record.

“I needed a threat that even Mitch wouldn’t be confident he could handle,” Mills says. “Because he’s the best in the world at what he does, I had to create an adversary that’s his polar opposite. Legion is an incredibly effective killer, but they achieve their goals in ways that Rapp would never consider. At his foundation, Mitch Rapp is an Old West gunslinger. But Legion doesn’t participate in shoot-outs. If they were to kill you, even you might think you were dying of natural causes.”

“I split my time between Jackson, Wyoming, and Granada, Spain,” Mills says. “Once we had vaccines and could travel again last spring, we moved back to Spain for a year and continued our exploration of this fascinating country. This is the medieval village of Rupit in the region of Catalonia. Many of the stone houses have been restored but that doesn’t destroy their soul. A magical place to poke around.”

Early in the book, there is a powerful scene where a hit squad attacks Rapp’s house. Mills says it was a challenging scene to write. He had to create many time-stamped diagrams of the house and grounds to keep all the elements in their proper place and time. During the attack, Claudia and her daughter take refuge in a panic room, although it is more a command center for her as she helps by giving directions to Mitch. Something to note is that she would give distances in meters instead of yards.

“I tend to be really strict with point of view,” Mills say. “I’d probably be better off just using imperial [measurements] throughout, but having Claudia talk in terms of yards and feet feels jarring to me. A French person would struggle with those conversions—particularly in a stressful situation. The US military uses the metric system a fair amount, and Rapp has operated abroad for most of his career.”

“One of the reasons we live in the city of Granada,” Mills says, “is because we have the best of two worlds: It’s in the mountains so the biking is fantastic, but it’s also a vibrant place with history, music, and a lively restaurant scene. The greater region of Granada is one of the largest producers of olives in the world, and riding through the fruit-laden trees is always a favorite part of the trail. By the pig farms, not so much.”

Longtime fans of the series will rejoice with the plenty of characters from older books playing small parts in OATH OF LOYALTY.

“To me, this series is very much about the Rapp-verse and the characters who call it home,” Mills says. “Like in life, it evolves but also revolves. Friends leave your life and then return, old enemies reappear, and your core relationships remain as a constant undercurrent.”