No Plan B Required 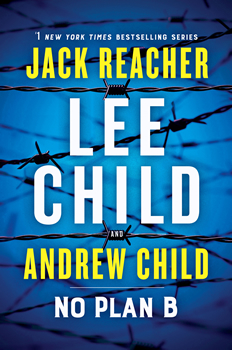 Andrew Grant—who also writes under the name Andrew Child—spent his writing career doing everything he could to avoid sounding like his older brother, Jim, known to the world as Lee Child, father of Jack Reacher, possibly the most popular thriller series in the world.

And then his brother told Grant he was going to retire and wanted him to take up the mantel. Grant thought about it and realized there was no one better suited for the task since he had been a beta reader for his brother from the beginning. So he said yes. Now he has his third Jack Reacher thriller under his belt, NO PLAN B, which launches this month.

Transitioning from his own writing style to that of his brother hasn’t been as easy as Grant thought. You might say he had no “Plan B” of his own while he’s learning on the job.

“Working on Reacher was too good an opportunity to turn down,” he says. “But it has been more time-consuming than I’d originally thought.

“It really boils down to the nuts and bolts of the craft. I was originally writing not to sound like my brother. I underestimated how difficult it would be to make that 180-degree mental turn…But once you get it right, it’s very satisfying.

“I think I’ve gotten better at it as we go along, particularly with this last book. I could nail it more quickly to get the flow and structure I wanted…It’s like lifting the curtain and looking behind to see the scaffolding.”

The scaffolding is all there in this latest edition of Jack Reacher when he arrives in a strange town and immediately steps into trouble. Unlike many of the other novels where Reacher stumbles upon a bully or bullies harassing an innocent citizen early in the story, this one starts with the bad guys going straight after Reacher, who is an eyewitness to a murder. It loses something visceral for the reader because there is no bully to scorn. And face it, no one was better at raising the reader’s hackles at the beginning of each book than Lee Child. But don’t take that as a reason not to read this thriller. The rest is pure Reacher. In fact, so pure, Grant went back to Reacher’s roots, which makes for a very satisfying read.

In Lee Child’s last Reacher novels before he retired and bought a new couch to complement his reading habit, his dialogue was getting terser, and Reacher was solving everything with his fists. 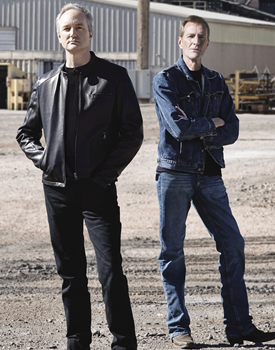 “I felt we were losing something of the character,” Grant says. “That, to me, cost Reacher two things. He was funny, sarcastic, and witty. And he lost that. We were losing this whole aspect of wittiness.”

And he points out, “He just doesn’t have to do it with his fists. He can do it with his words…I wanted to bring that back. Lee was surprised. He hadn’t consciously edited it out, and he agreed we should put it back in…It was something Lee had become conscious of toward the final couple of books he wrote. There was a change in the way he defined Reacher in those final books.

“I felt the series was rooted in the zeitgeist of the times.”

Reacher is now more prone to use technology, and since 9/11, he has carried an ATM card, expired passport, and toothbrush with him wherever he goes. Reacher was subtly changing even before Grant took the helm.

“From the character point of view, it’s important that Reacher remain the same,” he says.

To keep the character consistent yet growing, Grant talks with his brother frequently about his plot and characters and subtle changes to slip into the character. Like his brother, Grant starts a new manuscript on September 1 of each year and completes it by the following June. The brothers start with opening chapters and create a mental image of Reacher’s feelings associated with the plot. That prompts questions, and together they finally figure out “What would Reacher do?”

Grant says his brother used distributed planning to plot his books. Distributed planning, he says, is where Child would plot in stages. Yes, Grant says, Child is a pantser because he didn’t know how his books would end when he started them. But in each stage of the book, he’d carefully plan the plot several chapters ahead. That kept it fresh and unpredictable not only for Child but his readers.

NO PLAN B begins with a woman literally being thrown in front of a bus. Reacher sees what really happened from his vantage point, having just arrived in town, and the story starts racing quickly from there. It involves a road trip to the Deep South, where Reacher converges with two other characters heading to the same place—all for different reasons. As they converge, the action mounts as Reacher finally figures out what’s really going on.

This book has a hint of Ken Follett’s Eye of the Needle as Reacher is chased and attacked the closer to the truth he gets. Reacher’s wits are always one step ahead of the reader and the enemy except when he is caught in the dark about the actions of others. The reader gets the satisfaction of watching Reacher’s mind work while also enjoying the unanticipated action—especially with NO PLAN B, which has a higher body count than most Reacher novels.

Grant says working with his brother “is like having an extra editor in many ways.” After they finish, Grant’s wife, novelist Tasha Alexander, does his first beta read. “I feel that I’m too close and I can’t judge it myself.”

Grant will keep the series going and is hoping he can start anew on his own Paul McGrath series, which he was writing prior to taking on Reacher. He hopes to be able to handle both in a year or two. “It has been full-time on Reacher. I am still hoping to revisit that series I was working on.

“There’s a legion of Reacher fans I don’t want to disappoint,” he says. “There’s a lot more riding on what I write now.”

He’s taken on a challenge that few could pull off so well. Reacher fans are in good hands, and it would appear that Grant has no need for a Plan B.